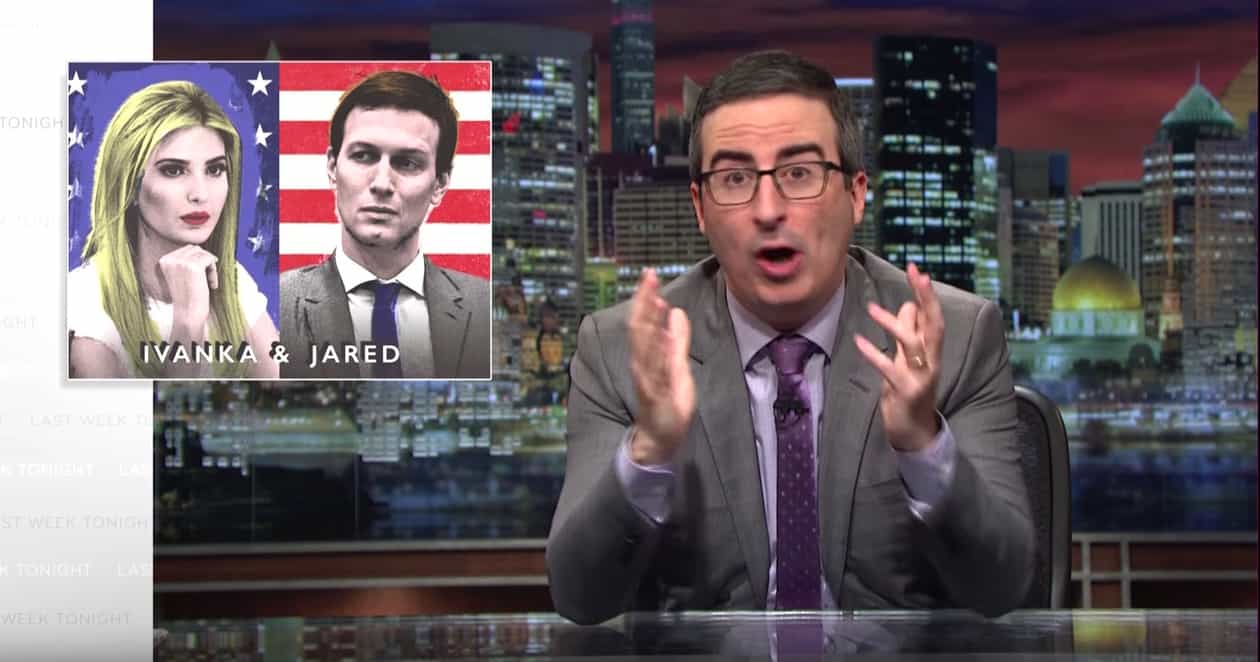 After delivering the news that Donald Trump may spend a lot of time naked in the White House, John Oliver came for his daughter and her husband, Ivanka Trump and Jared Kushner.

Said Oliver: “Jared Kushner and Ivanka Trump. They’re like America’s William and Kate, except in this case, both of them are attractive.”

Asked Oliver in this segment: “Is Ivanka really the moderating influence that people claim, and what in Jared’s background justifies such a gigantic White House portfolio?”

First, he laid into Ivanka, who once told Gayle King that “most of the impact I have over time most people will not actually know about.”

Said Oliver: “Oh, well, that’s convenient! So we should just give her credit when good stuff happens, and blame others when bad stuff happens? That’s not a job description of a political adviser, that’s a description of an Old Testament God. And that answer there enables you to project whatever you want onto her based on secondhand rumors and assumptions.”

And Oliver had similar remarks regarding Kushner:

“It is not unusual for powerful men to give their son-in-laws do-nothing jobs, but leave it to Donald Trump, who can’t even get nepotism right, to give his a do-everything job…Jared’s portfolio would be unmanageable for the smartest man on Earth, so is Jared Kushner the smartest man on Earth? … Have you ever heard him speak? Seriously, what does his voice sound like?”

Finally, Oliver concluded: “I know that all of this may seem like an evisceration of both Jared and Ivanka, but it is really not. I don’t know enough about them to eviscerate them, just as you don’t know enough about them to justify putting any real hopes in them. If they are the reason you are sleeping at night, you should portably still be awake.”

Previous Post: « Trump to Host WH Reception for ‘Neglected’ Conservative Media ‘Who Have Covered the President Fairly’
Next Post: ‘New York Times’ Warns Trump Administration: ‘Time is Not on the Side of Gay People’ in Chechnya »