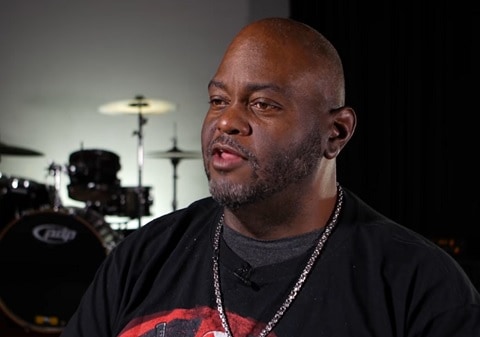 Lavell, who played Saul Goodman’s bodyguard Huell on Breaking Bad, made the comments on the web series VLAD TV.

He added that he rarely makes gay jokes during his stand-up routines for fear of a “gay mafia” that has the ability to “shut shit down.” He went on to attack transgender people for “trying to get their own bathrooms and sh*t.”

On his father coming out later in life, Lavell – who most recently appeared in an episode of New Girl – said: “I didn’t know how to react at first, and then I ain’t know if it was hereditary or not.”

“He wound up dying two years ago,” Crawford said of his father, who was married to a man before his death. Crawford didn’t know what to call his dad’s husband, debating whether “stepdad”, “stepmom”, or “momdad” was appropriate.

Crawford thinks LGBT+ people should continue to put up with hate speech. “All you homosexuals out there, you need to get tough skin,” he said. He also said that he was uncomfortable with comparisons between homophobia and racism, echoing sentiments made by Dave Chappelle earlier this year.

Lavelle later apologized for his comments, issuing the following statement.

To the Gay Community I want to apologize for my choice of words if it offended anyone.I apologize not that I’m afraid but because I am man and a man of God and it’s not my job to hurt or condemn but to entertain and inform my way. but [sic] if you watch the video (vladtv) without judgment and not so quick to be offended you will see I respect everybody and it’s none of my business what you do in your private lives so I apologize not to save face or out fear but it’s right thing to do

To the Gay Community I want to apologize for my choice of words if it offended anyone.I apologize not that … https://t.co/TGY0J8ZkAa