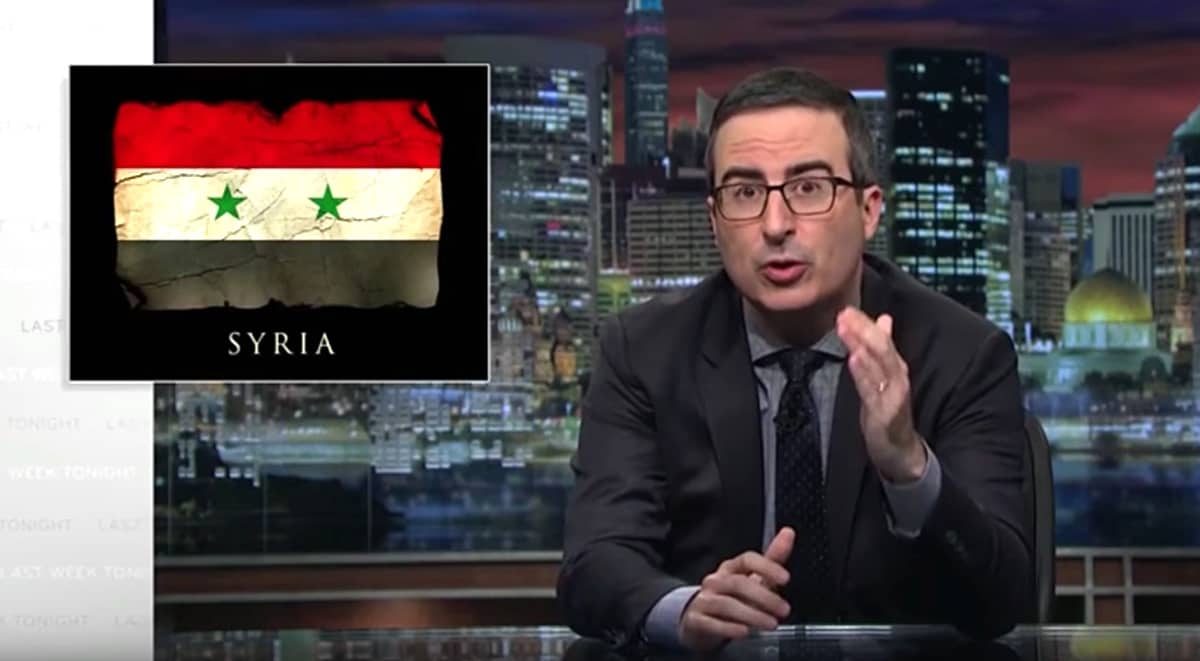 John Oliver dove into the military strikes at the Shayrat air base outside of Homs, Syria and what they achieved, which is questionable, but first he looked at the “orgasmic” reactions by the media, particularly that of NBC News anchor Brian Williams, who quoted Leonard Cohen and said “I am guided by the beauty of our weapons. And they are beautiful pictures of fearsome armaments.”

Quipped Oliver: “It is a little ironic to see Brian Williams on MSNBC talking about the ‘beauty of our weapons’ because that is not a phrase anyone would use if they had, for instance, ever been in a helicopter that was hit by ground fire.”

Oliver also looked at Trump’s hypocrisy on the issue, namely his tweets warning Obama to stay out of Syria.

What will we get for bombing Syria besides more debt and a possible long term conflict? Obama needs Congressional approval.

AGAIN, TO OUR VERY FOOLISH LEADER, DO NOT ATTACK SYRIA – IF YOU DO MANY VERY BAD THINGS WILL HAPPEN & FROM THAT FIGHT THE U.S. GETS NOTHING!

Oliver asked, “though the strikes seemed to make certain people feel better, what did they actually achieve?”

He then noted that less than 24 hours after the strike, aircraft were again using the base.

And there are many, many questions still to be answered:

“Look, maybe a symbolic airstrike was strategically the best move for Trump, but I don’t think he’s thinking strategically, because there is no indication that he’s taken the time to answer some fairly basic questions, like: If this was a warning shot, what are we warning against? Do we only want to stop Assad using chemical weapons, or are we going to push for regime change? If he does it again, are we prepared to go to war to stop him? If so, are we prepared for how significantly this may deteriorate our relationship with Russia? And how will that affect our fight against ISIS?”

But the one thing that should have us “very, very worried” is this:

“Right now, we have a president who feeds off praise and he just got a lot of it for bombing someone.”