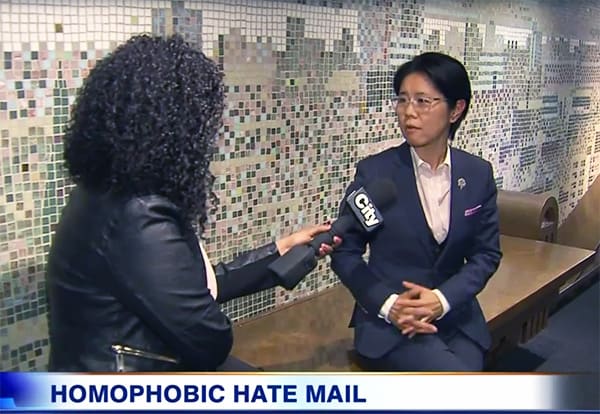 A hate letter filled with homophobic language and including threatening references to Toronto’s Pride parade was sent to the office of the only LGBT-identified city councilor, Kristyn Wong-Tam, this past Wednesday.

A line from the letter reads: “Now with the police not at your f_g parade, it makes it easy to hurt you all in a big way.”

“I think it’s really important for us to recognize that when language that is used is hateful and discriminatory, it actually creates a climate of fear and violence,” Wong-Tam said. “It can lead to violence, and I don’t want people to feel unsafe.”

After contacting security at City Hall, Wong-Tam and her team were told to report the incident to Toronto Police, who is now investigating.

The return address listed on the envelope is that of CityNews, a publication that is itself under investigation for its neo-Nazi views and imagery. Its editor-in-chief has denied any association with the letter, and police are considering the possibility that the address was used as a misdirection.

Wong-Tam noted the irony that she received the hateful missive on the Day of Pink, an international observance against bullying, discrimination, homophobia and transphobia.

She also thanked supporters for their expressions of solidarity in reaction to the letter in a follow-up tweet: “Thank you everyone for the positive messages. You represent the best of Toronto.”