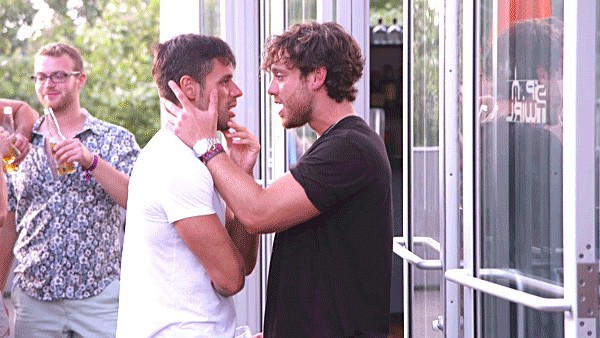 Fire Island appears to be indulging in those same tropes, but they’ve also got three other guys in seemingly stable committed relationships with aggressively bland white guys. Single people aren’t more inherently interesting than people in couples, but I do feel like I was promised a summer of “firsts” on Fire Island. I had assumed those firsts would include more sloppy making out with go-go boys and less new recipes for avocado toast, or whatever.

Still, last night’s episode did plant a few seeds for drama down the road for Jorge, Brandon and, ugh, Cheyenne. Pack your PrEP, poppers and pomeranian-mixes, because it’s time to go back to the island and check in with the guys.

As soon as they arrive off the ferry, the boys get accosted by someone passing out flyers for a dodgeball tournament. I used to be confused by gay guys’ compulsion to recreate one of gym class’ most unforgiving events in recreational dodgeball leagues, but then I realized they’re probably drawn to dodgeball because it’s one of the fastest team sports to complete, therefore freeing up teammates to hit the showers (and brunch) sooner.

Before the guys start tossing off balls (HEY-O!), ugh, Cheyenne has some explaining to do. If you recall, last week, Cheyenne firmly established himself as the absolute worst. It’s a title he seems to be clinging to with every mesh top and open vest over no shirt he wears on screen. Last week, he missed Justin’s art show, so to make it up to him, he’s cooking a family dinner.

Justin arrives as the guys are already prepping the meal, and he is not over what happened last weekend. He feels like Cheyenne’s apology was insincere (it was), and he wants to make sure Cheyenne knows it.

Now, this might only be funny to me, but I absolutely love when people on reality TV say they’re going to “confront” someone. It just feels so forced. No one talks like that. You might say you need to talk to someone, ask them something, work out your problems, etc. But saying you’re going to confront someone about an issue implies so much purposeful drama and conflict, and it’s so thirsty. Show, don’t tell, henny!

Justin “confronts” Cheyenne about the art show, and, hilariously, Cheyenne responds with an even more insincere apology. Just in case you were thinking, “No, he can’t completely lack any semblance of remorse or compassion, maybe that’s just the way he talks?” he confesses to the cameras that he would basically say anything to make Justin shut up about the whole thing. Ugh, Cheyenne, indeed.

He gets some karmic comeuppance pretty quickly, though. Patrick arrives to Cheyenne’s family dinner with his usual gaggle of gays in tow. Among them is Jallen (pronounced like how you feel when you’re wearing Dr. Scholl’s inserts). It’s actually a really fitting name, because it also sounds like a giant on Game of Thrones, which is essentially Jallen’s Grindr tribe.

Brandon is smitten with Jallen, and the two spend the night together. Brandon wants to know what other parts of Jallen are tall, as well. I don’t know, Brandon? His legs? What else do you describe as tall? No one says they’ve got a really tall, uncut c*ck. That’s not a thing!

God, Brandon, you’re SUCH a Brandon.

The dodgeball tournament is the next morning, and it’s only really fun to watch to see beautiful idiot Cheyenne fail so miserably at something. They’re all terrible, truthfully, but somehow, as usual, Cheyenne is worse. They lose in the first round, but later pick up an award for Best Team Spirit or Miss Congeniality or But You Have Such a Pretty Face or some such other pity trophy.

At post-dodgeball drinks, we start to see another side of Jorge. There’s something about him that just seems a little unhinged. He’s like a gay, Venezuelan version of Animal from the Muppets, both in wild-eyed appearance and unpredictable demeanor. One minute he could be screaming, then he’s crying, then he’s whooping it up and back again. It’s a real roller-coaster, but like one of those cheesy ones that gets set up in a mall parking lot and just goes around in a circle.

Before he even arrived on the island this episode, we learned about his long-term boyfriend, Fabio. They’re been together for eight year, but they haven’t seen each other in more than two months. This means that four of our six guys are spending their wild, crazy summer together while trying to navigate serious (and largely long-distance) relationships. In the immortal words of Elizabeth Lemon, “Long distance is the wrong distance.”

It started back in NYC when Jorge was having a totally casual Skype call with his bf wearing socks, pants, a belt, but no shirt, as one does. He caught Fabio en route to a big club with his straight friends, so Fabio isn’t exactly thrilled to have this convo at this moment. Jorge tried to get him to say “I love you too” with increasingly middle school-level desperation, but the best response he can muster is “I know.” Yikes.

Fabio is closeted, so it’s possible he didn’t want his straight friends hearing him say “I love you” to his boyfriend, or, I don’t know, just a thought, maybe he didn’t want his name and face plastered all over this gay TV show, JORGE? We later learn Fabio promised to come visit this weekend but went to Ibiza instead, and I just want to know what kind of lives do they lead where Fabio can just go to Ibiza on a whim and Jorge shows up to J.Lo’s dancers’ hotels with five Escalades? Are they some kind of heirs?

Anyway, after the volleyball game Jorge consoles himself in the arms of a handsome Italian suitor Khasan refers to as Jorge’s “mistress.” Khasan goes on to explain what mistresses are, as if it’s not a totally well-known concept.

What’s not explained is how mistresses factor into Jorge and Fabio’s relationship. Open relationships are far from uncommon in the gay community, but Khasan and Jorge talk about this mistress like it’s simultaneously no big deal but also a huge mistake. Is this part of Jorge’ and Fabio’s arrangement? No idea. Did Jorge violate his relationship with this mistress? Dunno. Did he even sleep with this guy? Probably!

We don’t know for sure. We just know Jorge is still having a case of the stammering sads the next day. He tries to call Fabio again, unprompted, in the middle of the day, but OF COURSE closeted Fabio doesn’t want to talk, AGAIN, in front of these gay cameras for this gay TV show on this gay network about his gay relationship. It’s not gay rocket science!

For what’s it’s worth, he rallies quickly. All the guys are going to see Patrick compete in a drag pageant over in Cherry Grove. Well, not all the guys. Cheyenne had to head home early for a last-minute photoshoot, so he’s missing a housemate’s big event once again. Brandon suggests that maybe Cheyenne could do literally the bare minimum and just text Patrick good luck, but Patrick is basically just like “nah.” Ugh, Cheyenne.

Patrick was inspired to sissy his walk after going full Reese/Lorelai Gilmore and hiking the Pacific Crest Trail. Part of his performance is an homage to his mother’s own pageant history, which is kind of sweet.

As Pat preps, the other guys head over to show their support. They make their way from the Pines to Cherry Grove walking through the infamous Meat Rack. To Fire Island’s credit, they quickly provide a little historical context and discuss the kinds of action that take place there with only minimal judgment. It’s a delicate edit to put together for sure, and I think they did a pretty good job giving enough context. Even Brandon’s very 21-year-old reaction felt more cute than condescending.

Patrick definitely gets his life as “Poly Cockit,” a drag name that ranks somewhere above Penny Tration but below Sharon Needles. It didn’t hurt that he had lots of help getting ready, but still, he’s having a blast up there. The housemates — Jorge especially — are losing it in the crowd, whooping, hollering and waving signs. It’s not enough to overshadow Patrick’s awkward drag strut (which is weird, because Patrick out of drag seems to just naturally glide around the island), so he earns another consolation prize — Audience Favorite.

The real prize though is the FaceTime call with his mother showing off one of his lewks inspired by a dress she wore when she was a competing beauty queen. His mom and (a guy I assume is) his dad are super supportive and delighted with Patrick’s work. Good for all of them!

I’m delighted by the fact the random drag queen Brandon talks to at the pageant is also named Brandon, proving once again that 60 percent of the inhabitants of Fire Island are in fact named Brandon.

Next week: Patrick confronts, ugh, Cheyenne about bailing on yet another event.