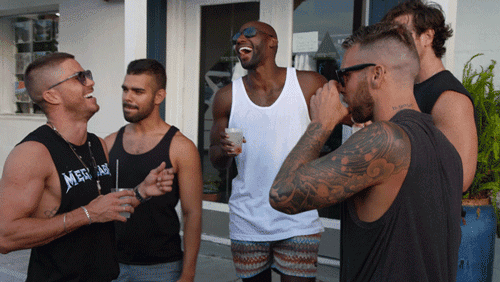 Before we even get to the island, we get a whirlwind checkin with the boys back in the city. Khasan is 5-6-7-8ing in some anonymous dance studio. Justin is Facetiming, ugh, Cheyenne about running late (as usual). Jorge is describing his roommates to what I think is some kind of gay wizard.

We spend the most time pre-island with Brandon, sitting outside talking on the phone to a friend(? his mom?) about Jallen. Brandon is wearing head-to-toe beige, which feels very on-brand for all of his generic Brandonness. Also, I guess now we’re calling Jallen “Jay-lynn,” even though I’m almost positive we were calling him “Jellen” (rhymes with Ellen) last week. Most importantly, the main takeaway is Jallen is still very, very tall.

They arrive on the island and want to immediately start drinking, which I would too if I was staring down the prospect of sharing 48 hours with Cheyenne. Justin volunteers to load everyone’s luggage into a wheelbarrow and take it back to the house while the other boys go to “tea” (which is just gay for happy hour on Fire Island). If you’re thinking Justin is going to almost immediately complain about volunteering to do this task, you’re right! He greets Patrick back at the house by telling him he just had to lug 14 bags up to the house by himself. Gurl.

At tea, Brandon tries to warn Cheyenne that he hurt Patrick’s fee-fees by skipping out on his drag show, but, not surprisingly, Cheyenne is unmoved. His logic and reasoning behind missing Patrick’s pageant is so profound and beautiful, I have no choice but to quote it in full:

“At the end of the day, business over drag shows — unless drag shows is your business — is always going to take precedent.”

Ugh, if only that could fit on a novelty tanktop.

Besides slamming back vodka sodas like the world is ending, the boys’ other priority at tea is to invite everyone they run into to their upcoming houseparty. It’s a strange twist considering the last three episodes have focused on how mad everyone gets when Patrick invites literally the whole island to their house, but here they are doing the exact same thing. Hello, Kettle? This is Pot. You’re wearing my black muscle tee. (OK, not my best work.)

After tea, Justin escorts the housemates to his buddies’ place for a beer and pizza party. Justin explains that these friends know all his neuroses, and starts to outline them like a living Tinder bio. I’ve heard of wearing your heart on your sleeve, but Justin wears his heart, mind, Diagnostic and Statistical Manual of Mental Disorders diagnosis, blood type, Social Security number, hopes, dreams and fears on his sleeve.

The sleeve is a metaphor, of course. This is Fire Island, there’s not an actual sleeve in sight.

The real drama unfolds as Patrick fires backhanded comments at Cheyenne about being a flake and not caring about anyone but himself. While accurate, it does feel a little aggressive. It’s fun to watch Cheyenne squirm, though.

Back at the house, Cheyenne is complaining about the whole situation to Brandon in the kitchen when Patrick swoops in to grab his purse. That’s when they really get into it. Patrick’s point is that Cheyenne says he’s going to be somewhere, then doesn’t show up AND neglects to even text the most haphazard “sorry, work thing!” message. What Cheyenne hears though is that he shouldn’t take a “$30,000” job so he can go to a drag show, which is not the point at all. That’s like, I don’t know, just hypothetically, if a Presidential election was directly influenced by outside interference from a foreign power, and the current President’s primary concern is who told the press about it.

Alright, so it’s not a perfect parallel, but you get the point. This is a very straightforward, reasonable request from Patrick (and previously Justin), and Cheyenne is completely oblivious to their feelings. His inability to even remotely understand Patrick’s perspective makes him look like a total sociopath. Their fight ends in a sort of no-contest, with Patrick making a dramatic (and fabulous) exit with his green purse. He’s going to need that storage for all his smug self-satisfaction.

The next day, Justin has his next emotional moment about wearing his first Speedo. Justin. I get it! A lot of (most? all?) gay guys have some kind of body hangup. But you look great! Better than like 85 percent of most straight guys. Justin is “fat” like Scarlett Johansson is “curvy.” Stop relying on the body-ody-ody dysmorphia!

It’s almost party time, and Patrick is passive-aggressively mixing punch. You know Patrick is industry, because only a professional bartender could pour Svedka with such disdain. All the men arrive to their weird 8 p.m. pool party, including Jallen. He just sort of trails little Brandon like Hodor dutifully following — OH MY GOD ANOTHER BRANDON — Brandon Stark.

Brandon is feeling a little fussy being tied down to the friendly giant. After all, they did only meet one week ago, and Brandon is out here to feel his oats. He skips merrily along the party flirting with other guys, while Jallen mopes around the pool. The housemates all try to cheer him up by telling him that maybe he and Brandon aren’t on the same page. Very comforting stuff. Very cool of Justin to totally throw Brandon under a bus for this guy they’ve known for a week. Granted, he’s only known Brandon for like two more weeks than that, but you know the saying: Brodors before Hodors.

I guess the party wasnt from 8 p.m. until QUESTION MARK, because it certainly seems to end definitively in time to hit the bars. Jorge runs into — *guttural scream* — BRANDON (with the wing tattoo) outside. Brandon (now with wings!) clarifies that he and Patrick were never actually dating, and Jorge is scandalized! I mean, considering Jorge is in an eight-year long-distance relationship that includes mistresses, this feels like a pretty straightforward relationship dynamic to comprehend. Still, Jorge is shook.

The guys all stumble home 3 a.m. after a night of hard drinking. Jorge and Patrick have a pow-wow on the steps to the house bathed in some of the worst lighting I’ve ever seen on television, including season one of RuPaul’s Drag Race. Seriously, Jorge’s beard somehow looks Cabbage Patch doll yellow blonde. It’s hard to watch. Jorge tells Patrick about what Winged Brandon had to say, and Patrick isn’t surprised. Patrick never made a big deal out his thing with Winged Brandon; the housemates did.

Elsewhere in the night, Justin runs naked into the ocean because carpe diem, #YOLO, you miss 100 percent of the shots you don’t take, and other aphorisms he read on a Pinterest board. Khasan — easily the most charming, sane, intelligent castmember I’m definitely in love with — meets Justin down by the water. Justin then opens up with his sincerely very touching story about illness and suicide and reclaiming his life. It’s all very moving, but also it’s all very extra. Justin appears to live his life like it’s one big, emotional Grey’s Anatomy monologue. It’s exhausting just watching the edited version. I can’t imagine how draining it must be to have to be there with him in that moment.

Then there’s Brandon and Jallen. B’s trying to sort of break it off with Jallen, but he clearly still wants to climb that bean pole, so he’s telling Jallen in the least certain terms that he’s not here to fall in love, but he’s open to it and wants things to unfold organically. Confused yet? It basically boils down to Brandon wanting to be able to bang any dude he wants on the island, but also wanting to fee-fi-fo-f*ck Jallen whenever the mood strikes him. He wants to have his cakes and eat them too.

The next morning (or more likely early afternoon), the guys are huddled in the kitchen. Brandon tells them he laid it all out there for Jallen, but as he recounts the specifics of the story, it becomes more and more obvious he did nothing of the sort. Oh, Brandon, you dumb baby.

The guys make it out to the pool, and Brandon is essentially nestled in the lining of some guy’s swimtrunks when in comes Patrick with Jallen in tow. Pat and Jallen sit awkwardly apart from the group, and Justin goes in on Brandon. He prefaces his admonishment by warning Brandon that he’s going to “mom” him, like mom is a verb.

He’s coming from a good place trying to warn Brandon that being a hot little 20-something and not caring about anyone else’s feelings will only get you so far. But, then again, Brandon can see Cheyenne going on $30,000 Instagram photoshoots and doing just fine, so I’m not really sure the lesson is going to sink in.

We’ll see next week if Brandon is a changed man-boy, but judging by the preview, it doesn’t seem that way. Simmering tensions are going to boil over between several of the guys, and I’m just holding out for someone, anyone to yell “THIS IS NOT ‘BEST FRIEND ISLAND.'” Is that too much to ask?

Previous Post: « Missouri Lawmaker Says Being Gay and ‘Being a Human Being’ Are Different: VIDEO
Next Post: Trump’s New HHS Official Charmaine Yoest Is a Major Transphobe »