JASON CHAFFETZ. Handcuff the White House leakers: “I don’t care who it is. Democrat or Republican, you cannot have that happen. You probably ought to put some handcuffs on them and put them in jail.”

TAKE IT ALL. Sinkhole opens up outside of Mar-a-Lago: “The 4-foot by 4-foot hole is in front of the club and appears to be near a new water main on Southern Boulevard, the alert said. Utility crews from West Palm Beach secured the sinkhole and likely will be doing exploratory excavation today.

MAMMA MIA. A sequel is coming, along with the entire cast, whether you like it or not.

RACHEL MADDOW. I considered Roger Ailes to be a friend.

ABROAD. Of course Trump’s overseas trip has been riddled with hypocrisy: “Naturally, he and his family have replicated the very things for which he once criticized President Obama: The President for bowing to a Saudi king; the First Lady for not wearing a headscarf. And of course he briefly attended a men-only Toby Keith concert, because real life is a garbage nightmare.” 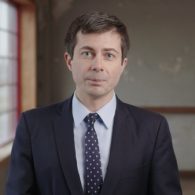 PETE BUTTIGIEG. Gay South Bend mayor backs walkout on Mike Pence: “What I appreciate about it is it’s clear that the students want to express their commitment to tolerance and the values that they believe a Catholic University ought to uphold, and that this administration is not compatible with those values,” Buttigieg said. “And at the same time, I think they found a very respectful way to do it.”

MOLDOVA. Police halt LGBT march: “A protest march organized by Moldova’s LGBT community on May 21 in the capital, Chisinau, was halted after just several hundred meters as police sought to avert a confrontation with participants in a counterprotest made up of ‘Orthodox priests and believers.’ Scores of participants in the LGBT march, who were wearing white shirts with the logo of the No Fear social campaign, were evacuated in buses by police after eggs and water were thrown at them by those attenting the counterprotest.”

WITNESS. Katy Perry teases upcoming album in short teaser: ““Can you see me? I mean I know you can see me. But can you really see me?”

MUSIC VIDEO OF THE DAY. Lana del Rey and The Weeknd, “Lust for Life”.