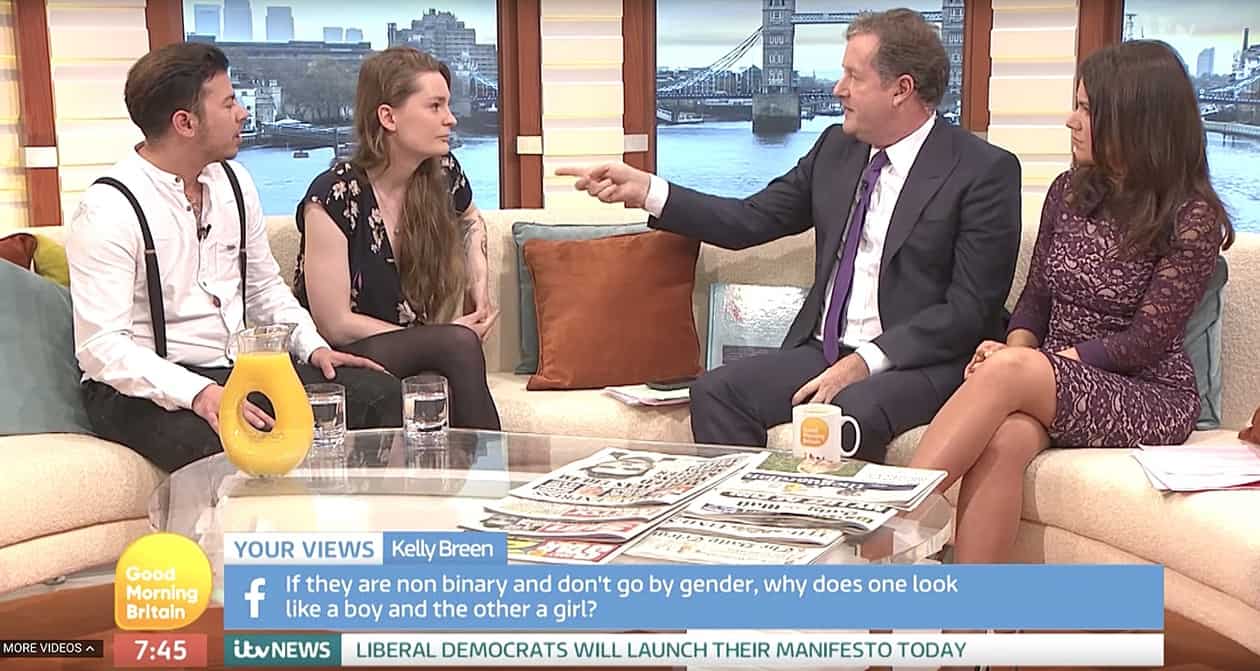 In 2014, Piers Morgan was involved in a multi-day train wreck when he sensationalized an interview with trans author and activist Janet Mock, continually referencing Mock’s genitalia and pointing out that she was “born as a man.”

Any “journalist” with a reasonable amount of intelligence who endured a highly-publicized barrage of criticism over transgender issues would have digested that experience and come out of it with a heightened understanding of how one might conduct such an interview, but it appears that Piers Morgan remains unable to frame a segment on the issue in an inoffensive way.

On a Good Morning Britain show today, the International Day Against Homophobia and Transphobia (IDAHOT), Morgan lobbed offensive questions at a nonbinary couple he had invited on the show.

Morgan called gender fluidity a “massive fad” and asked the couple if they “abide by the laws of the land,” asking, “isn’t gender a societal thing that we should just respect and acknowledge that that’s the way it is?”

“What are you?”, he asked the couple, later adding, “My problem with everyone being free to identify themselves in any way they choose is where does that end? Where are any boundaries, for instance, for kids at school? If you can basically come in and say ‘I’m not a boy or girl anymore’, what else can you say you’re not? Can I be anything I want? Can I be an elephant? I literally say, ‘I’m now an elephant’ and I get afforded elephant rights…Can I go to the London zoo and demand to be put in an elephant compound because I’m now an elephant?”

The UK group Stonewall responded to Morgan’s interview: “No one has the right to deny another person’s gender identity, and to mock them for trying to live an authentic life is a form of bullying and completely unacceptable.”

.@PiersMorgan Your attacks on non-binary people are damaging and offensive. No one has the right to deny another person’s gender identity. pic.twitter.com/oBT9HqWOrk

Previous Post: « Gay Couple Discovered Having Sex in Indonesia Will Be Caned 85 Times in Public
Next Post: ‘CBS This Morning’: 20 GOP Lawmakers Declined Our Request to Appear and React to Trump News – WATCH »