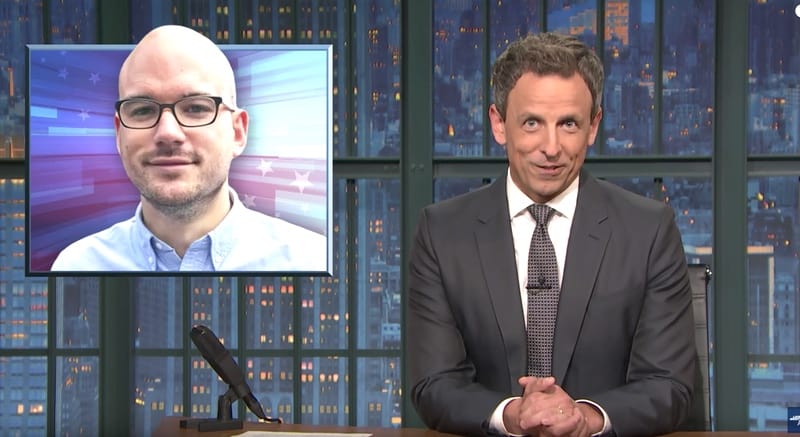 In his latest A Closer Look, Seth Meyers examined how Donald Trump is pissing off the rest of the world in the wake of the London Bridge terror attacks and withdrawal from the climate accord.

But first, Seth Meyers took a moment to salute Richard Angell (who John Oliver toasted in his Sunday night monologue) and his reaction to the terror attacks.

“These people shouldn’t win. This is the best city in the world and Borough Market is one of my favourite bits of the best city in the world. I’m not going to let the barbaric acts of cowardly people minimise that. I’ve got to pay my bill. Also, we haven’t given the staff a tip and they looked out for us when they should have been helping themselves. It was lovely food and I want the rest of my main course. If they [the extremists] have a problem with me having a G&T with friends and flirting and being gay then I’m going to carry on doing it. If that’s so barbaric to these people then two fingers up to them.”

Responded Meyers: “Two fingers. British people are so hardcore they use an extra finger to tell you to f**k off.”

Meyers continued. “So with all this compassionate defiance on display from actual Londoners, what was the president of the United States doing?”

Well for one thing, golfing:

“So rather than fill any of the hundreds of vacancies in his government, Trump spent the weekend golfing, and then woke up Monday morning to watch TV and pick fights on Twitter.”