You are here: Home / Jeff Sessions Snaps at Senator Ron Wyden After Accusations of Stonewalling: WATCH 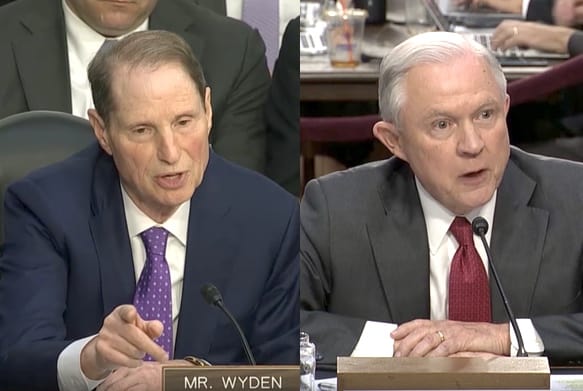 ALSO: Sessions Calls Any Claim He Was Involved in Russian Attempts to Influence Election a ‘Detestable Lie’

Sessions declined to elaborate about his conversations with President Trump concerning the handling of the investigation into Russian meddling in the U.S. presidential election.

But “I am not stonewalling,” he said, his voice rising. “I am following the historic policies of the Department of Justice” regarding confidential communications with the White House.

Sessions appeared frustrated when Wyden continued the line of questioning, while raising his own voice. “I can tell you that … this is secret innuendo being leaked out there about me and I don’t appreciate it,” Sessions said.

Previous Post: « Sessions Calls Any Claim He Was Involved in Russian Attempts to Influence Election a ‘Detestable Lie’
Next Post: Sen. Kamala Harris Shut Down While Trying to Get a Straight Answer Out of Jeff Sessions: WATCH »