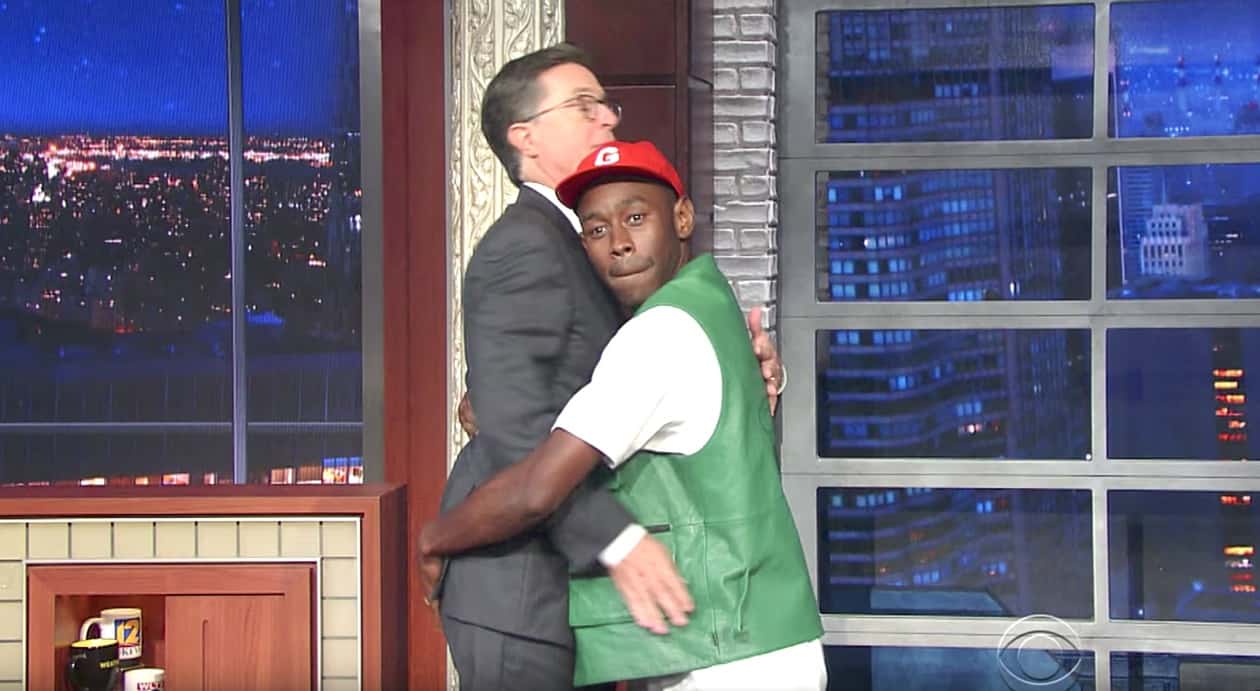 Much of the talk leading up to the release of star rapper Tyler the Creator’s new album Flower Boy has been that he appears to come out as gay in the album’s lyrics.

But unlike his friend Frank Ocean, who clarified his own coming out in follow-up interviews, Tyler has so far left the world speculating if he’s actually coming out, or just gay-baiting.

RELATED: Is Tyler the Creator Coming Out as Gay on His New Album? The Internet is Buzzing

Stephen Colbert tried last night in an interview to push him toward the topic but the closest he got was a quick spanking from the rapper, who arrived on the show wearing nothing but a pair of boxers.

We did learn a few other details about the 26-year-old’s interests.

“Elizabeth Taylor is my jewelry idol,” he told Colbert. “Her use of coral is crazy. She’s dead now though.”

And then we learned that Tyler knows nothing about Elizabeth Taylor aside from her outsize interest in jewelry.

“Did you ever see National Velvet?”, Colbert asked.

“What are you talking about?,” Tyler said, to a stunned and bemused Colbert. “She was in a movie? I don’t know all that stuff. I found a book one day lurking in Barnes and Nobles. It was like ‘oh my god, this little white lady got some nice stuff’ and called it a day.”

“Let’s get together and watch some Elizabeth Taylor,” said Colbert.

Replied Tyler, “You’re asking me on a date?”

Quipped Colbert: “Many critics have said the same thing.”

Meanwhile, Ben Beaumont-Thomas at The Guardian wonders if he’s coming out or just being a queer-baiting provocateur?

But what are we really witnessing here? Is this a young man’s earnest struggle to come to terms with his sexuality in a public forum, awkwardly using humor as a defense mechanism to protect himself from a potentially unforgiving rap community? Or is this just another example of a button-pushing attention-seeker, ridiculing the gay experience for puerile effect? Without explicit clarification from Tyler himself, it’s difficult to define exactly what’s at play.

In the past, when he’s been questioned about his sexuality, his answers have been able to fit into either school of thought, although probably more easily into the latter. In a Rolling Stone profile from 2015, the journalist Ernest Baker noted the constant references to being gay amid the banter of Tyler and his entourage, causing him to wonder what exactly was at the root. When queried about it, he claimed to be “gay as fuck” and said his friends were used to him “being gay”, but when asked outright, he denied it.

There’s clearly something fetishistic for Tyler about homosexuality and the latest bout of gay references could just be a more tempered iteration of calling everyone a faggot or equating gay with stupid. It’s a different way of poking (his justification for using the word faggot was that it “hits and hurts people”) and the delivery has been formatted to make it more palatable for a wider audience. He’s made it clear in the past that more mainstream success is of high importance to him. In a recent chat with Zane Lowe, he revealed that he was keen to get Nicki Minaj on the second verse of I Ain’t Got Time to open his music up to a new audience while also tweeting that he wanted a No 1 album “sooooo bad”. I’m not pushing the cynical idea that Tyler has “gone gay” to achieve the commercial success of Ocean, but his messaging has clearly been tailored to avoid limiting breakout appeal.