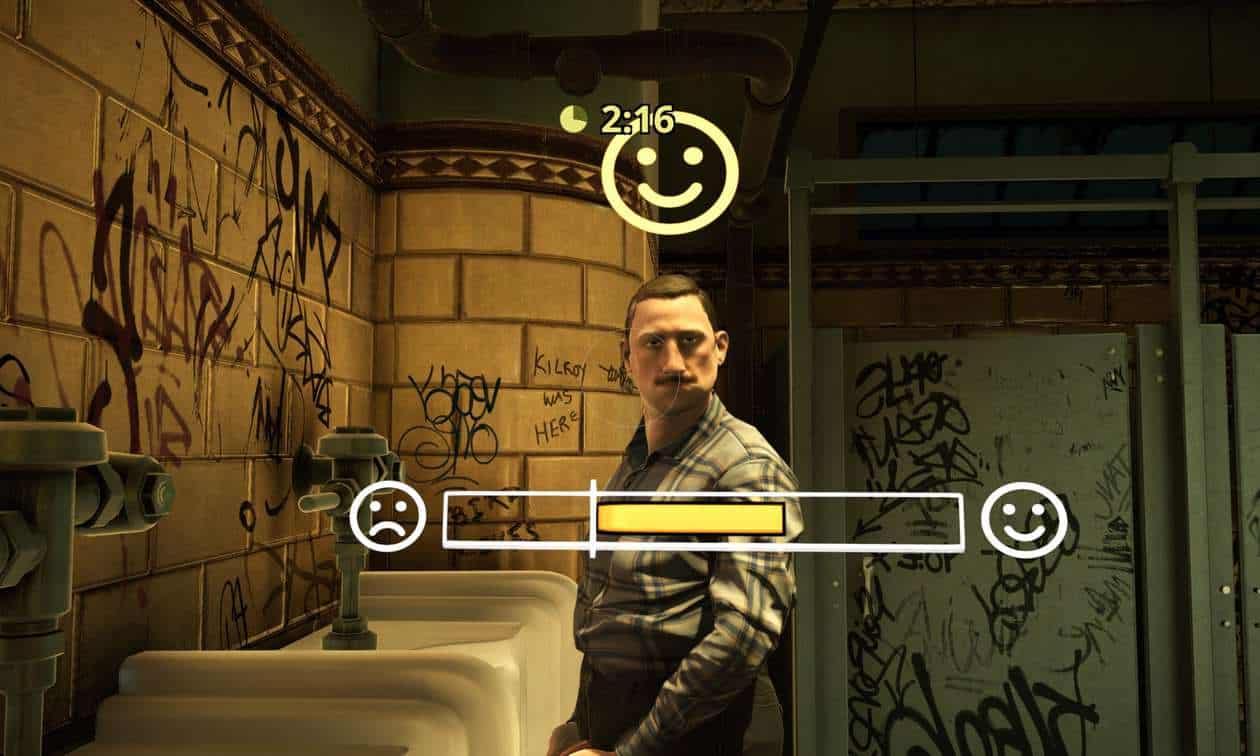 The Tearoom, a new video game from Robert Yang described as “a (free) historical public bathroom simulator about anxiety, police surveillance, and sucking off another dude’s gun” takes you into public restrooms where gay men cruise for sex.

Writes Yang in the game’s description:

In 1962, the Mansfield, Ohio police department setup a hidden surveillance camera behind a two-way mirror, and secretly filmed dudes having sex with dudes in a public bathroom. The police used the film footage to imprison them for a year or more under Ohio’s sodomy laws.

Today in 2017, police still target men who have sex with men — and in video game land, I still have to deal with Twitch banning my gay games by secret trial as if they’re the f**king game police. So to appease this oppressive conservative gamer-surveillance complex, I have swapped out any pesky penises in my game for the only thing that the game industry will never moderate nor ban — guns. Now, there’s nothing wrong with guys appreciating other guys’ guns, right? 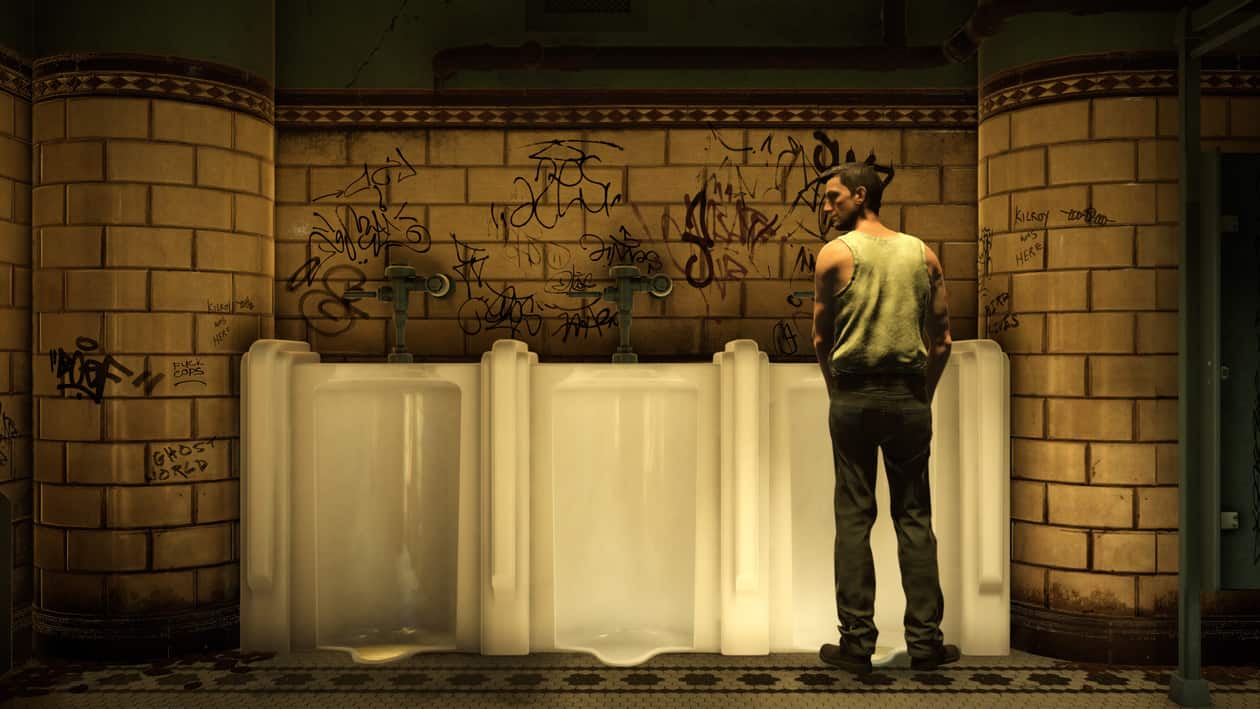 The game takes common video game tropes and turns them on their head, writes The Guardian:

Your goal is to engage in sexual acts with other men, but before that, you must wait for someone to enter, and then engage in a ritual that involves repeated periods of prolonged eye contact, all the while keeping an look out for the police….

…In the game, large icons clearly indicate when it is or isn’t appropriate to look towards the man at the other urinal. It’s like a subversion of the stealth genre, as this time you want to be seen (though not by the cops). Yang wrote on his blog that this mechanic was difficult to design because – as he puts it – “decades of male heterosexual hegemony have trained gamers into thinking of ‘looking’ as a ‘free’ action, with few consequences or results.” Players who are used to works that pander to the straight male gaze may struggle to empathise with someone for whom a glance may be punished.

If the other man doesn’t want to be looked at, a red eye with a line through it appears on screen. The player cannot move away from the urinal, so the only actions available to them when not soliciting or engaging in sex are to look around, perhaps glancing out of the window to check for cop cars, or to pee. Ironically, Yang wanted to create his “technologically advanced urinal” (which you can aim a stream of urine into and also flush) as a response to the habit other video games have of providing bathrooms that serve no purpose. 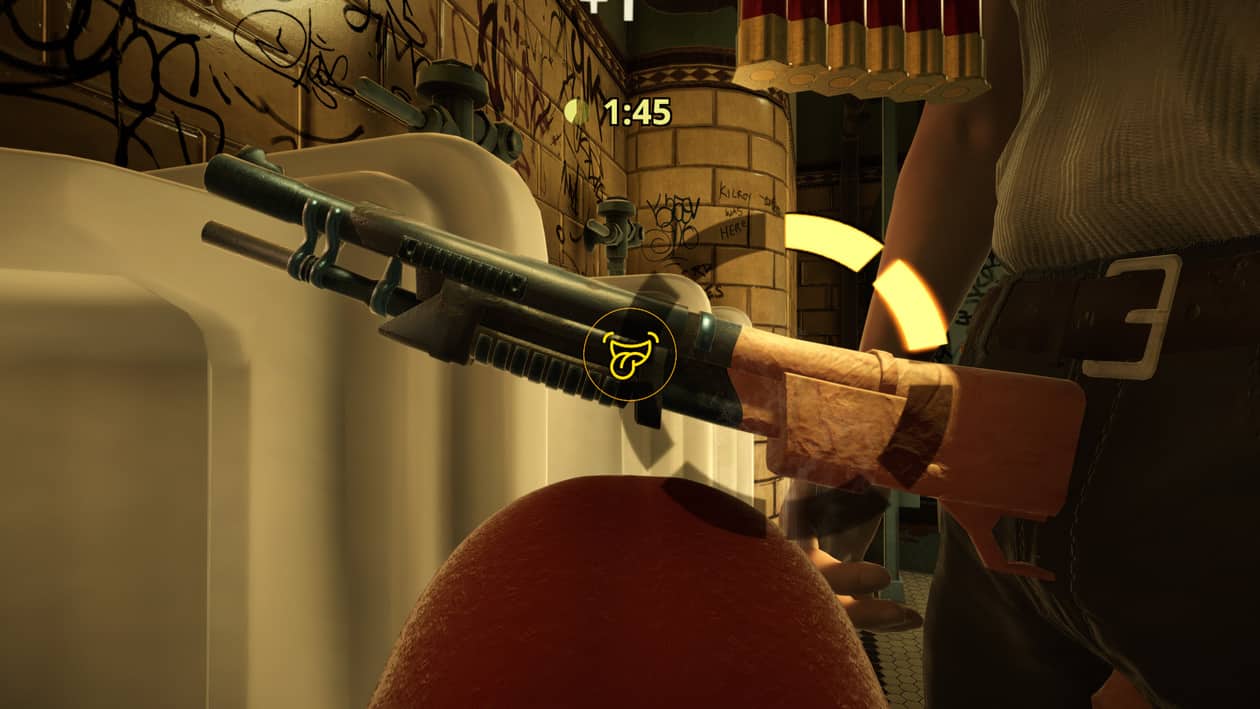 And substituting guns for male organs has other meaning here, aside from avoiding being censored by the game network:

Yang is also interested in the political implications, and in the “very strange relationship” that video games have with violence and gun culture. On his blog Yang also highlights the disconnect between how the US treats guns (eg with “open carry” laws) versus the depiction or display of genitals, especially if those genitals belong to a trans person.