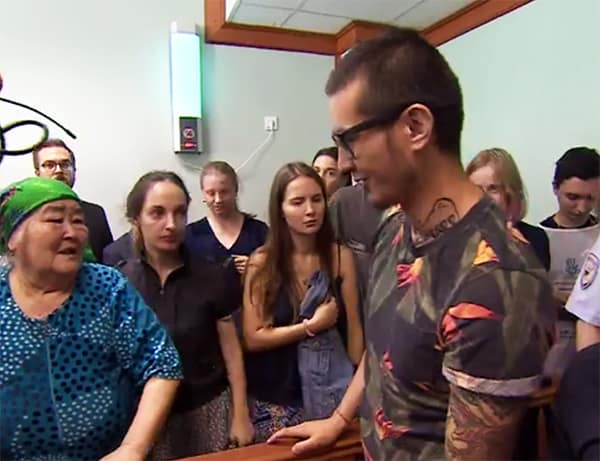 Russian journalist Khudoberdy Nurmatov won a temporary reprieve from a Moscow appeals court today as he sought to block his impending deportation to his native Uzbekistan, where human rights groups said he faced a near-“death sentence.”

Nurmatov, who is openly gay and writes under the pen name Ali Feruz, has worked for the investigative Novaya Gazeta newspaper since 2011, reporting on hate crimes, migrant worker rights, and LGBT discrimination. The newspaper has garnered much international attention of late for exposing mass human rights violations against gay men in in the Russian republic of Chechnya earlier this year.

Nurmatov is currently undocumented, having fled Uzbekistan, where he was tortured for being gay, and has had multiple bids for asylum in Russia denied. He was arrested last week en route to work and threatened with deportation. The European Court of Human Rights intervened on Friday, issuing a preliminary injunction against Nurmatov’s deportation, but it had remained to be seen whether Russia would abide by the decision.

The imminent expulsion of the journalist, Khudoberdy Nurmatov, to Uzbekistan, ranked by rights groups as one of the most repressive countries in the world and where homosexuality is illegal, has attracted international criticism and appeals to Russia to halt it. On Friday, the European Court of Human Rights ordered an emergency stay on Nurmatov’s deportation.

The judge at the Moscow City Court today responded to that order, ruling that no deportation will take place until Nurmatov’s case has been examined by the European Court.

Nurmatov will now likely remain in a migrant detention center until the European Court ruling, one of his lawyers said. That could take between a year and 18 months, the lawyer, Tatiana Glushkova, told ABC News by phone.

Amnesty International (AI) has raised concerns that Russian courts are colluding with Uzbekistan’s notorious security services to deport hundreds of people to the Asian country, where sex between men is a criminal offence with a maximum sentence of three years in prison.

The deportation order is “as close to a death sentence as it can be”, AI’s Europe and Central Asia deputy director, Denis Krivosheev, told the site.

Nurmatov had previously said “I’d rather kill myself” and said he’d face a “long, slow death” if deported. Russia has claimed that the case is simply about migration violations, but it now appears that Nurmatov may have until September to issue a fresh asylum application.