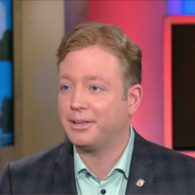 LOG CABIN REPUBLICANS. Gay GOP group’s event to take place at Trump Hotel: “Our desired original venue was unable to accommodate us on any of our desired dates,” Gregory T. Angelo, the group’s president, told TheWrap, adding that “the Trump Hotel gave us a very competitive deal.”

ARNOLD SCHWARZENEGGER. There are not two sides to hatred.

.@Schwarzenegger has a blunt message for Nazis. pic.twitter.com/HAbnejahtl

JAMES MURDOCH. 21st Century Fox CEO donates $1 million to Anti-Defamation League, denounces Trump in email: “These events remind us all why vigilance against hate and bigotry is an eternal obligation — a necessary discipline for the preservation of our way of life and our ideals. The presence of hate in our society was appallingly laid bare as we watched swastikas brandished on the streets of Charlottesville and acts of brutal terrorism and violence perpetrated by a racist mob. I can’t even believe I have to write this: standing up to Nazis is essential; there are no good Nazis.”

BIRTHDAY SONG. Madonna forgets the lyrics to her own song.

RAMI MALEK. On playing Freddie Mercury and the iconic rock group Queen: “It’s a phenomenal experience. They’re a talented bunch of dudes and I am terrified.”

BOTH SIDES. Democratic group runs scathing ad on Trump. “A top Democratic-aligned group released a 30-second digital video ad and a nearly 50-page report on the supposed links between white nationalists and President Donald Trump’s administration. Bridge Project, the non-profit research arm of Democratic-aligned super PAC American Bridge, released a report called “Uniting The Right: The Trump Administration And White Supremacy,” which lays out instances in which members of Trump’s administration took actions that made them, according to the group, ‘white supremacist sympathizers.'”

NEW YORK. Stonewall Democrats withdraw support for  Councilman Ydanis Rodriguez after he supports homophobe Ruben Diaz: ‘The club, which organized a special meeting Thursday evening, shortly after the councilman’s endorsement became public earlier in the week, said in a statement that although Rodriguez has historically been a friend of the club, he “misrepresented his position on supporting candidates who work against LGBT equality in his questionnaire, and that his support for Diaz Sr. was unacceptable.’

Previous Post: « Michelle Obama to Appear on ‘Will & Grace’ Reboot: Report
Next Post: 5 White Supremacists Whining About How Unfair Things Are After Charlottesville »