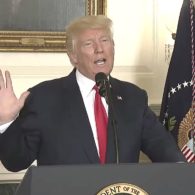 DAILY STORMER. GoDaddy bans neo-Nazi website: “GoDaddy’s announcement was in response to an appeal from a Twitter user who called attention late Sunday to an online post by Daily Stormer founder Andrew Anglin. The post disparaged Heather Heyer, the 32-year-old woman killed Saturday in Charlottesville, police say, after a man plowed into a crowd with his vehicle.”

ROLLBACK. Trump’s HHS expected to roll back Obamacare rule: “A proposed rule from the Department of Health and Human Services is expected to be released in the coming weeks or months that opponents say would make it easier for doctors and hospitals to deny treatment to transgender patients and women who have had abortions.”

We’ve seen the terror of white supremacy & racist violence before. It's a moral issue – an affront to America. We must all stand against it

Heartbreaking scenes in #Charlottesville. Violence and racism have no place in America.

Pundit Ana Navarro: Trump unfit to be president, "unfit to be human" https://t.co/035bl1atxD 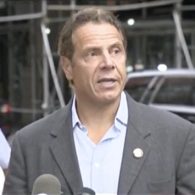 CONGESTION PRICING. Cuomo considers $8 traffic fee to improve NYC subways: “With voters increasingly blaming him for the transit mess, Mr. Cuomo is working behind the scenes to draft a proposal and is using Mr. Bloomberg’s failed campaign as a lesson to improve its chances of winning the support of stakeholders, including the State Legislature.”

KENTUCKY. Lexington mayor says all Confederate statues are coming down after Charlottesville.

I am taking action to relocate the Confederate statues. We have thoroughly examined this issue, and heard from many of our citizens.

The tragic events in Charlottesville today have accelerated the announcement I intended to make next week.

ADERONKE APATA. Nigerian gay rights activist wins 13-year battle for asylum in UK: “Aderonke Apata feared being killed or imprisoned if she returned home, but her application for asylum was rejected for a second time in 2015 after the judge said he did not believe she was a lesbian. ”

WHEN PIGS FLY. Bob Mackie to design off-Broadway revival of 1996 musical created by late costume designer-playwright Howard Crabtree and Mark Waldrop: “The revue, which features music by the late Dick Gallagher, was praised for its wit and irreverent humor as it skewered gay culture and American politics in the late 1990s—including references to Newt Gingrich and legislation that proposed curtailing gay rights.”

Previous Post: « Donald Trump Calls Out White Supremacists as Hate Groups for First Time Since Violent Charlottesville Rally: WATCH
Next Post: Trump Lashes Out at CNN Reporter, Who Snaps Back: ‘Haven’t You Spread a Lot of Fake News Yourself, Sir?’ – WATCH »