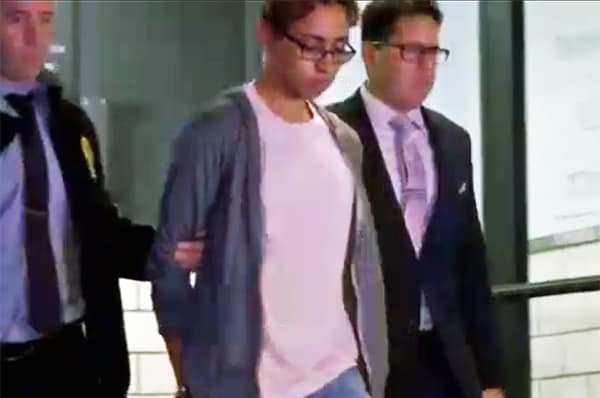 Further disturbing details have emerged in the case of the teenager who stands accused of murder for stabbing two schoolmates, one fatally, on Wednesday morning in a Bronx high school.

18-year-old Abel Cedeno is said by family friends to have been repeatedly bullied with racist and homophobic taunts before lashing out at the perpetrators, a 15- and a 16-year-old, with a switchblade.

Cedeno was placed under suicide watch and held without bail in the murder of 15-year-old Matthew McCree and the stabbing of a second youth as horrified students in their history class watched helplessly.

“The kids were calling him a f—-t, calling him a s–c,” said [Savannah] Hornbeck, 34. “After it had been reported numerous times and there was no reaction from the school, Abel felt (there was) no other way out.”

A second Cedeno family friend, Iris Couvertier, said she spoke with Abel inside the 48th Precinct after his arrest.

“Those two kids in the class, they hit him,” she said. “He said that they hit him in the face. He said it’s because he’s gay or bisexual.”

As cops led Cedeno out of the precinct late Wednesday, the suspect — wearing a pink T-shirt, a gray hoodie and a pensive stare — silently mouthed the word “yes” when asked if he was bullied.

He had purchased the alleged murder weapon online about two weeks before the killing, said NYPD Chief of Detectives Robert Boyce.

[Ariane] Laboy remained in critical but stable condition at St. Barnabas Hospital in the Bronx. McCree was pronounced dead at the same hospital — where his mother was working at the time of the attacks, according to her husband.

Cedeno’s own mother reportedly remains stranded in Puerto Rico following the devastation of Hurricane Irma. The murder victim’s family denies that he would have taken part in anti-gay bullying, according to news site DNAinfo:

“You need to ask the right questions first, before they paint people, making it look like some mean person,” Victor added.

The suspect’s family extended their condolences to relatives of his victims.

“It’s been tragic for everyone that’s been involved,” Hornback said.