HEALTHCARE. Bill Cassidy fights back against Jimmy Kimmel. “Cassidy’s claims are false. While the idea behind Graham-Cassidy is to shift federal health care funding from Democratic states to Republican ones (“Maine, Virginia, Florida, Missouri”), the block grants states would receive would steadily decline. The Center for Budget and Policy Priorities found that Graham-Cassidy’s $239 billion cut over the next decade would not only hurt blue states, but also red ones like Alaska, Arizona, and Maine.” 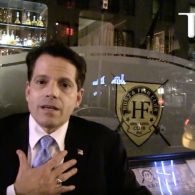 THE MOOCH. Tom Brady didn’t go to the White House because of Ivanka: “Maybe there was a relationship between him and Ivanka at some point. Maybe it was someone else, I don’t know. My guess is, which is typical, there could be a little bit of jealousy there and protection and possession of Tom Brady, and she probably didn’t want him to go.”

BILLS BILLS BILLS. Trump reportedly using campaign and RNC funds to pay legal bills in Russia probe: “RNC spokesperson Cassie Smedile confirmed to Reuters that Trump’s lead lawyer, John Dowd, received $100,000 from the RNC and that the RNC also paid $131,250 to the Constitutional Litigation and Advocacy Group, the law firm where Jay Sekulow, another of Trump’s lawyers, is a partner.”

DALLAS. Women say they were targeted in downtown stabbing for being gay. “The women were on their way to the gay pride parade on Sunday afternoon when a homeless man beat and stabbed them. The three women are good friends — two of them are gay.”

RUSSIA. Activist in court on “gay propaganda” charge: ‘If the court convicts Romanova, it would be at least the seventh conviction under Russia’s 2013 federal “gay propaganda” law that effectively prohibits any positive information about “non-traditional sexual relations” from public discussion. Romanova is accused of sharing information on Facebook about the Youth Coalition for Sexual and Reproductive Rights, an international group that advocates for young people’s access to accurate information about health and sexuality. The group believes that information and education are vital for safeguarding the life, health, and well-being of young people.’

LAOS. Terrifying footage as construction workers flee after a dam bursts in the Xaysomboun Province. There were no reported injuries or deaths.