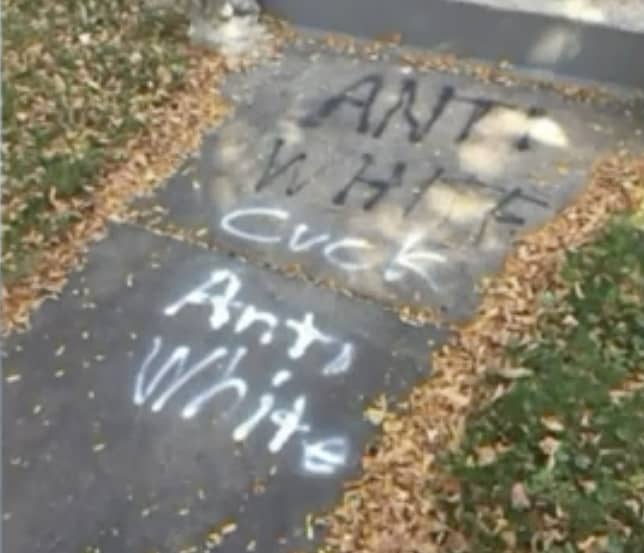 A gay Chicago couple’s home was targeted by a vandal who sprayed “anti white cuck” in graffiti on their sidewalk.

However, Jeff Zacharias said  he’s not anti-anything. In fact, quite the opposite.

The family fought back, posting their own signs saying “hate has no home here” before cleaning up the graffiti.

“I think it was very healing to get rid of it, but I think it was, it’s still on our mind,” Zacharias said. “It’s very scary; we feel real uneasy tonight.”

The couple, who has a college-age daughter, also has a sign in their yard that reads “Here we Believe Love is Love, No Human is Illegal, Black Lives Matter, Science is Real, Women’s Rights are Human Rights, Water is Life, Kindness is Everything.”

That sign was defaced as was another on their block that said “Black Lives Matter”.

“There’s a lot of old trauma that comes up for us. I’ve run the gamut today from being really angry, to being scared, and just put the signs back in our yard and up our efforts to resist even more. We’re going to keep fighting for people who are disenfranchised and disempowered, and not allow bullies to win. The fact that the signs were destroyed just makes me know that they need to be there.”

Watch a report from CBS Chicago:

Previous Post: « Randy Rainbow is Having Nun of Donald Trump in ‘How Do You Solve a Problem Like Korea?’ — WATCH
Next Post: Steve Bannon Plotted with Anti-Gay Hate Group to Plant Mole Inside Facebook Days Before Joining Trump Campaign »