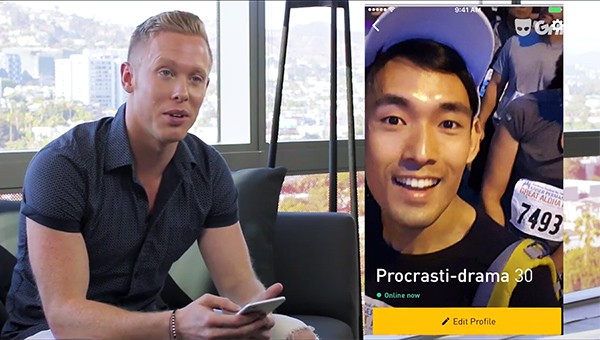 The social hook-up app Grindr has launched a five-part web series, playfully entitled What the Flip?, featuring Grindr users who switch profiles with each other to see what the gay messaging app is like for different demographics. In this installment, an Asian man and a white man try out each other’s profiles.

As host Billy Francesca asks, “We are investigating the question: when does a preference turn into discrimination?”

He stops bystanders to seek their opinions, while the featured users themselves tackle the issues they face. The white guy is confused by the term “rice queen,” slang for somebody who pursues Asians, while the Asian guy is more than familiar with it: “When I hear the term ‘rice queen,’ I immediately roll my eyes.” Other issues including having to “pre-select” users with whether they are “into Asians,” as well as the frequency and etiquette of messages, are confronted.

The thorny issue of the intersection between race and dating in the gay community has been explored periodically, especially as it pertains to apps such as Grindr, and this segment put out by the app’s administrators themselves seeks to shed further insight into the subject.

Apologies for the autoplay video.