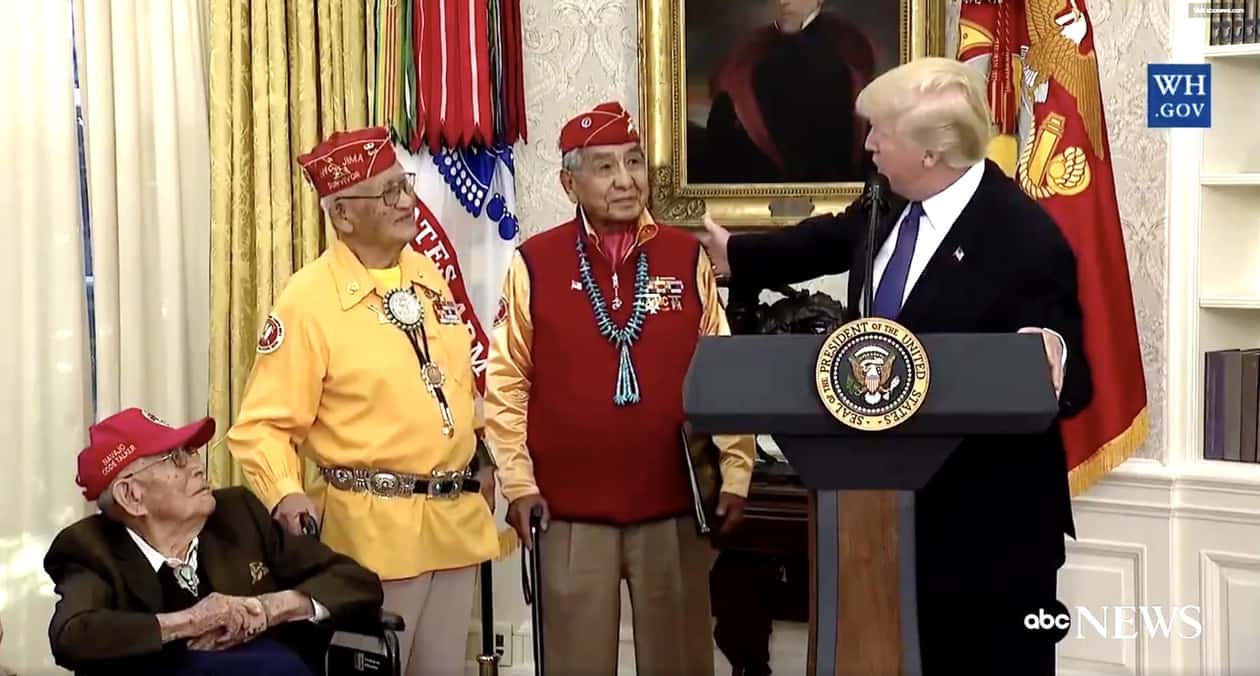 During the ceremony, Trump was standing in front of a portrait of Andrew Jackson, who signed the Indian Removal Act.

“You were here long before any of us were here. Although we have a representative in Congress who they say was here a long time ago. They call her Pocahontas. But you know what? I like YOU. Because you are special.”

Said Crotty in the statement:

“Today’s careless comment from President Trump is the latest example of systemic, deep-seated ignorance of Native Americans and our intrinsic right to exist and practice our ways of life. The intentional disregard of the historical trauma of Pocahontas as a sexual assault survivor directly resulting from colonization is disturbing.

“The Navajo People are not strangers to the prejudice, discrimination, and marginalization perpetrated by western culture. Our woman and children are targets of violence. We must speak out against such ignorance in every instance, in hopes for a better future for our children and our land.

“I must respond to White House Press Secretary Sarah Huckabee Sanders’ flat-out denial of this racial slur, dismissing the tangible and egregious impact pejoratives have on Indigenous people. I must respond to President Trump’s remark today referencing Pocahontas. With due respect, it is problematic for the president to use this term in the manner we heard today. It diminishes the experience of Pocahontas and is totally inappropriate. The reckless appropriation of this term is deeply offensive and dangerous to the sovereignty and identity of our peoples. Such rhetoric is damaging, and it a serious infringement of our right to live as Native Americans.

“The Navajo Code Talkers are not pawns to advance a personal grudge, or promote false narratives. Such pandering dishonors the sacrifice of our national heroes. Let me be clear, such antics do not change the fact of history. Indigenous peoples’ disparate socioeconomic issues are a direct result of this false narrative, and we cannot sit idly by as the citizens of the United States and our Indigenous children are gas-lighted from this terrible truth.

“We honor and respect the Navajo Code Talkers, and we are proud of their sacrifice. Let us not allow this display of immaturity and short-sightedness distract us from the important issues we advocate for collectively as sovereign nations on this continent, but continue to advance the cause and secure the future of Indigenous people in America.”

Navajo Nation response to Trump's insult:
“The Navajo Code Talkers are not pawns to advance a personal grudge…" pic.twitter.com/3KFxlIYOoT

Previous Post: « Barbie Comes Out for Marriage Equality
Next Post: Get in the Holiday Spirit with ‘Drunk History,’ ‘President Show’, ‘Pentatonix’ and more TV this week »