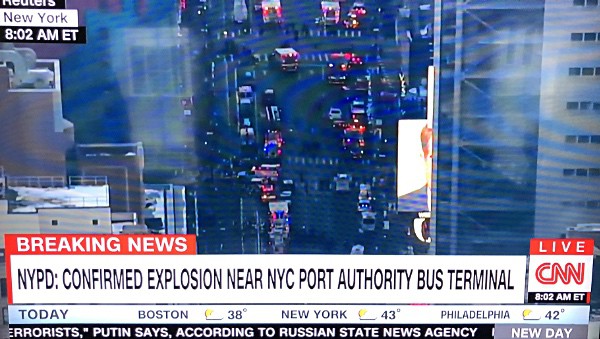 An explosion took place this morning at Port Authority Bus Terminal in NYC during the Monday morning rush hour.

After the explosion, Port Authority cops moved in and struggled with Ullah, who had wires attached to his body, sources said.

He tried to set off the rest of his bomb, but only part of it went off. Two PAPD officers grabbed him and successfully removed the explosives without further incident.

Ullah is at Bellevue Hospital being treated.

This wild animal yelling out quotes about Isis while being transported. pic.twitter.com/33stXSEaaq

The NYPD is responding to reports of an explosion of unknown origin at 42nd Street and 8th Ave, #Manhattan. The A, C and E line are being evacuated at this time. Info is preliminary, more when available. pic.twitter.com/7vpNT97iLC

Due to police activity, the entrance to the subway at the Port Authority Bus Terminal on Eighth Avenue is closed.

Updates will be posted from @PANYNJ and @PABusTerminal as they become available.

Previous Post: « London Teen Forced By Attackers To Apologize For Being Gay Says He Is Not Sorry For His Sexuality
Next Post: Santa’s Buffest Pole Dancing Elf is Making Our Christmas Wishes Come True: WATCH »