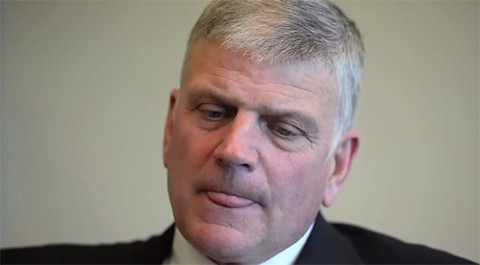 Lawmakers in England are working to ban hate preacher Franklin Graham from entering the country.

Graham – who receives an annual salary of $620,000 from Samaritan’s Purse – is booked to appear at the Lancashire Festival of Hope in Blackpool next September.

The festival – organised by the Billy Graham Evangelical Association, of which Franklin Graham is president and CEO – is supported by a number of Anglican clergy and churches in the Blackpool area.

However, according to the Guardian, several MPs, including a government minister, have urged the home secretary Amber Rudd to refuse UK entry to Graham. A petition against him being granted a visa has gathered close to 7,000 signatures.

“As a Christian and as a leader of a church that particularly welcomes LGBT people, I’m horrified that other local churches are inviting someone with this record of hate speech.”

She added that Graham’s visit had triggered an “enormous amount of protest from Christians” and would be “extremely destructive” in northwest England.

Paul Maynard, a minister at the Department of Transport and a Blackpool MP, has written to Amber Rudd urging caution over Graham’s visit to the UK.

Gordon Marsden, another Blackpool MP who has called on the home secretary to consider refusing Graham entry, said the evangelist may have broken UK legislation on hate speech.

“I think frankly the evidence is piling up that his visit to the UK … would not be a good thing and not probably in my view a very Christian thing.” Graham’s statements were “incompatible with what Jesus said in the Bible”, he told BBC Radio Lancashire.

Afzal Khan, the Labour MP for Manchester Gorton, said he planned to “make representation to the home secretary if it looks like he is intent on coming.”

In an open letter to the Bishop of Blackburn Blackpool, vicars Andrew Sage and Tracy Charnock wrote:

“We are so nervous about this proposed visit and the damage it will do. Our local Imam is already afraid to put his personal address and phone number on their website. We just wish that we could somehow make it clear that our opposition to Franklin Graham’s visit next year is not just a ‘spat’ between two different Christian groupings. We want to express our opposition as Christians, as citizens of the UK and more especially the North West and Blackpool.

“Despite the confusion, and despite the hurt we know it will cause to some of my Christian and indeed Anglican brothers and sisters in Blackpool, like Sajid Javid, we cannot stay silent in the face of such dangerous and outspoken prejudice. To be clear. We are NOT against the Mission, but we are opposed to Franklin Graham leading it.”

“The council’s position on these matters is robust and clear. We want to tackle discrimination, promote equality and increase respect and understanding between people regardless of their race, religion or sexual orientation or any such matter that can be subject to prejudice in our society.”

“If matters are brought to our attention that could constitute incitement to hatred, we will forward these to the relevant public authorities and should this be proved we will not hesitate to terminate this booking.”

A Billy Graham Evangelical Association spokesperson said the event “will be a positive and encouraging event with music and also a message from Franklin Graham about the hope that can be found through a relationship with Jesus Christ.”

Watch Graham explain his views on homosexuality below.