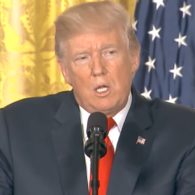 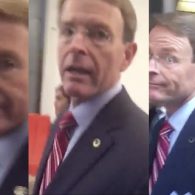 WHAT ME WORRY? Trump says he’s not at all concerned that Jeff Sessions spoke with Robert Mueller. “Trump’s comment comes after the Justice Department confirmed that Sessions was interviewed last week as part of Mueller’s investigation into Russian meddling in the 2016 election.

Reporter: “Are you concerned about what the attorney general told the special counsel?”
Trump: “No, I’m not at all concerned.” pic.twitter.com/l7gyfzm2nf

BROMANCE OF THE WEEK. Alexander Skarsgard and Jack McBrayer.

MATT DRUDGE. Trump can’t wait to run for reelection in 2020.

THE WALL. Chuck Schumer withdraws offer of big spending boost on Trump’s wall:  “The Senate minority leader, through an aide, informed the White House on Monday that he was retracting the offer he made last week to give Trump well north of the $1.6 billion in wall funding Trump had asked for this year, according to two Democrats. And now they say Trump will simply not get a better deal than that on his signature campaign promise.”

TRUMP’S WAR ON THE PRESS. The consequences.

Chris – spare us ur journalistic heroics – she lies Chris – u put her on – and u act stunned – indignant – YOU KNOW SHE LIES – WE KNOW SHE LIES – STOP TALKING TO HER CHRIS – u r no ones hero captain obvious – YOU ARE THE GATEKEEPERS CUOMO!!!! DO UR JOB DAMN IT #DONTBOOKLIARS 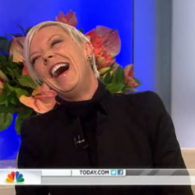 NOT TAKING OVER ANYMORE. Tabatha returns to TV: ‘Now, the 48-year-old is back with a new series, Relative Success With Tabatha. She describes it as the “2.0 version” of her old show — but this time, it isn’t about taking over. It’s about giving family businesses tools to succeed with minimal hands-on intervention from Tabatha herself. Now, she’s more of a coach. In fact, she’s actually certified to coach people in life and in business.

SHROPSHIRE, UK. White supremacist planned attack on Pride event with machete, court hears: ‘A white supremacist with “a deep-seated hatred of black, Jewish, Muslim and especially gay people” was planning a “murderous attack” on a Pride event using a machete and an axe, a court has heard. Ethan Stables, 20, was planning acts of terrorism against groups he hated, prosecutors told Leeds Crown Court. In June last year, he had assembled a machete, knives, an axe, an air rifle and a ball bearing gun when he became “enraged” about a planned LGBT Pride event at the New Empire pub in his home town of Barrow-in-Furness, Cumbria, a jury heard on Tuesday.’

FLOODWATER RESCUE OF THE DAY. Unreal rescue in Baton Rouge.

NEW TUNE OF THE DAY. Zedd, Maren Morris, and Grey “The Middle”.

TRAILER OF THE DAY. A Wrinkle in Time.

TOO HOT FOR TUESDAY. Nabil Taleb.

Previous Post: « BBC Presenter Richie Anderson Comes Out as Gay to His Football Teammates: WATCH
Next Post: ‘RuPaul’s Drag Race All Stars’ Is Back, ‘Drunk History’, Criss Kills On ‘Versace’ And More TV This Week »