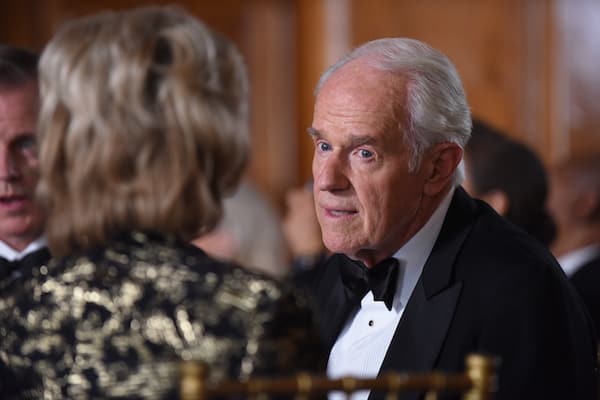 Last night’s episode of The Assassination of Gianni Versace: American Crime Story tackled one of the most mysterious elements of the Andrew Cunanan killing spree: the gruesome murder of Lee Miglin.

As part of the saga tracing Cunanan’s exploits leading up to Versace’s killing, it makes sense to chronicle Miglin’s murder. However, so little has been confirmed about the nature of Andrew and Lee’s relationship prior to the tragedy, the show leans heavily on artistic license. That’s fine, in terms of dramatic storytelling.

Where this episode suffers is in the writing. Ho boy, were Ryan Murphy and co’s most ham-fisted impulses fully indulged. (At one point, someone actually ate a fistful of ham, and it was the most apt metaphor in all of tonight’s episode.) It was all tell and no show. So much telling. And telling in ways no one would ever actually speak.

“You’re so dominant out there, but so submissive in here,” Andrew tells one of his victims before dropping the only thing more heavy than the hand behind that metaphor — a bag of cement. This is the same team that in American Horror Story: Asylum had one character put lipstick on a Virgin Mary statue while screaming “Whore!”

Luckily, the hour of television was significantly buoyed by another knockout performance from Darren Criss and a special guest appearance from the incomparable Judith Light. Thank goodness Ryan Murphy attracts such top-tier talent, because in lesser hands things could get schlocky real quick.

Knowing that we’re taking the details of this story with an extremely large grain of salt, let’s dive into what went down in our recap below. 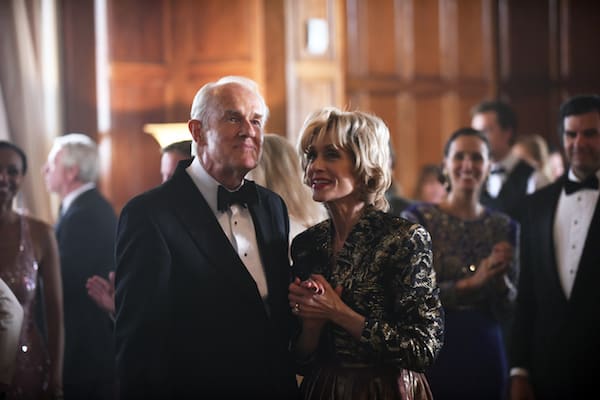 Lee Miglin and his wife Marilyn are attending a fancy fundraising function. Marilyn introduces Lee to the stage by describing him as emblematic of the American Dream. He got his start selling pancake batter out of a beat-up car, and now he’s responsible for building some of the most famous buildings in Chicago. He was also instrumental in launching Marilyn’s perfume and cosmetics Home Shopping empire.

Back home, Marilyn dramatically removes her makeup — she’s taking off her brave face, get it, GET IT?

Meanwhile, Lee gets a call from Andrew telling him that he’s going to be in town for a few days. As luck would have it, Marilyn has to travel for business. That’s convenient! Lee joins Marilyn in bed and rests his hand atop Marilyn’s. She squeezes his. There’s clearly love here, but distance too.

With Marilyn out of the house, Lee preps for Andrew’s visit (including a stop at his in-home altar because HE IS CONFLICTED, IF THAT WASN’T CLEAR ALREADY). Andrew parks nearby. He comes into the house, and it seems as if this is a rendezvous they’ve played out many times before.

Lee’s excited to show Andrew plans for a new building he’s working on that’ll be the tallest in the world. He wants to call it the Sky Needle, but Andrew, suddenly very cranky, points out that he might as well call it the Miglin Tower, because it’s clearly all about him. 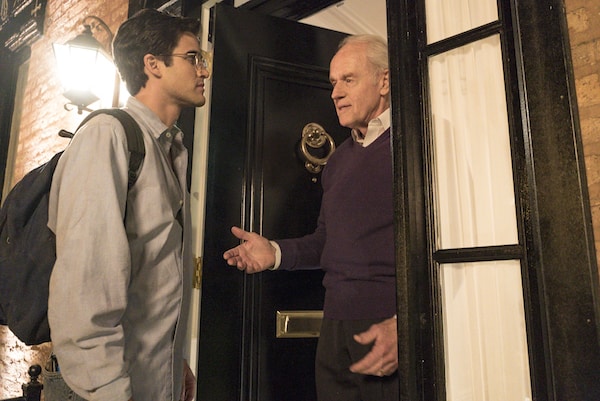 It’s a tense moment between them, until Andrew plants a hard, passionate kiss on Lee. He asks about that old Pretty Woman rule: Do the other escorts kiss him on th mouth like that? Of course, they don’t. “I’m not like most escorts. I’m not like most anybody,” Cunanan says out loud to Lee like people do.

The quick turn from cutting Lee’s aspirations down to the passionate kiss is to help gain back Lee’s trust. Andrew leads him to the garage, stuffs a glove in his mouth and then proceeds to do that weird tape mask thing that is extremely creepy and for sure going to keep a generation of gay men from hooking up with anybody that keeps a roll of tape in plain sight.

Andrew tortures Lee, including dropping huge, heavy bags of cement on his septuagenarian chest. (“Concrete can build, but concrete can kill” — oof!) He stabs him and slits his throat. Then he burns the plans for the Sky Needle at Lee’s altar.

Marilyn arrives home from her business trip and can immediately tell something is amiss. She stands on the front stoop until two neighbors stop by to help her investigate. They notice some things off (including ice cream melting on the counter and a knife stuck inside a ham on Lee’s desk) and call the police.

The cops find the grisly scene in the garage. Andrew is long gone in Lee’s Lexus, but Marilyn refuses to entertain the idea that Lee and Andrew had any kind of pre-existing relationship (a fact the Miglin family maintains to this day). Instead, she tells the police this was an opportunity killing. Lee was old, alone and hard of hearing. It wouldn’t take much to surprise and overcome him. She’s a powerful woman with a lot of political influence. The implication is that she pushed this narrative on the authorities (and it may have hampered the investigation that could have prevented Versace’s murder).

She also rattles off a list of items Andrew took: suits, cash, those gold coins we saw Andrew pawning in previous episodes. Through it all she maintains a calm, collected demeanor. It’s not until she’s alone with someone she trusts later that she allows the grief to fully wash over her. 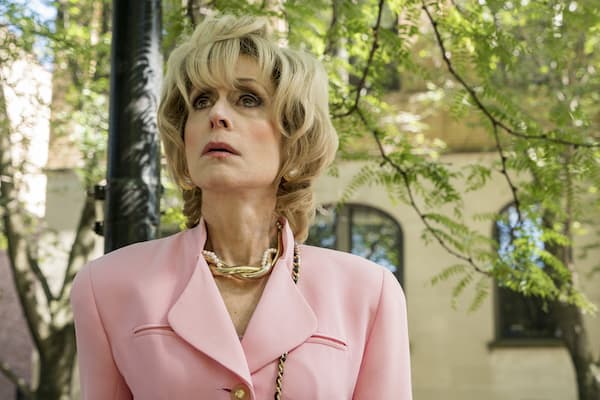 Light is a powerhouse, carrying the majority of the hour on her shoulders, but here she too suffers from some incredibly heavy-handed writing: “How can someone who cares so much about appearance appear not to care?” She’s holding it together for her family, including her son, an aspiring actor set to appear in the upcoming film, Air Force One. (There’s another theory that Andrew actually had a relationship with Lee’s son, not Lee. The Miglins also deny this.)

Despite all the pressure to keep the story contained, news leaks that the cops have been tracing Lee’s car phone in the stolen Lexus. Andrew hears this on the radio and immediately looks for a way to ditch his ride. He follows a solo trucker, eventually robbing him. He forces the man at gunpoint into a basement. The man pleads to see his wife and child again, but Andrew kills him anyway.

We may never know what really transpired between Andrew and Lee. Maybe Lee’s killing, like the pickup truck owner, was random. However, the narrative American Crime Story is painting is how the closet not only led to getting Lee killed, but the shame around being outed as a gay man at the time was enough to impede an investigation that could have stopped a serial killer. Whether or not this particular element of the story they’re telling is factual, there is certainly some truth to that.