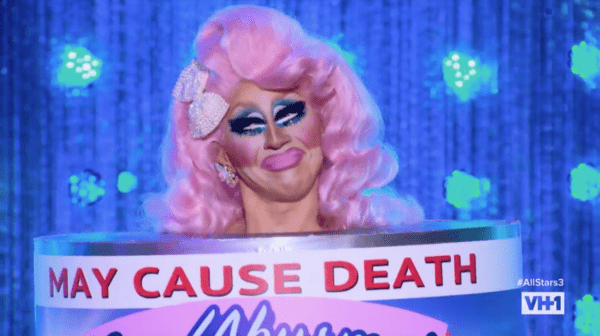 You’d think an episode dedicated to Andy Warhol’s legacy would inspire a bit more creativity than what we saw last night on RuPaul’s Drag Race All Stars. Instead, we’re treated to some of the series’ weakest challenges and lackluster judging.

It all starts with Ru busting into the workroom in his Warhol fright wig to introduce this week’s theme. The ode to Andy, pop art and Studio 54 begins with a portrait challenge requiring the gals to get into quick drag. The entire affairs feels incredibly random as the finished photos are then colorized and painted over anyway, so what’s the point? Aja wins, because sure, but really it’s impossible to gauge who truly outperformed anyone here. 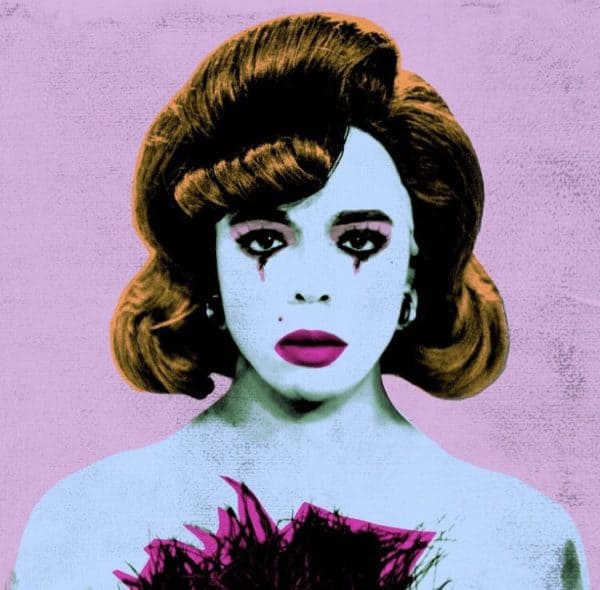 The main challenge is All Stars’ ball. Instead of the usual three looks we’re used to, the queens are tasked with creating two looks, one of which is their own (cheesily) branded soup cans. The other lewk is Drag Race’s great equalizer: The sewing challenge. Inspired by the cocaine-dusted nights at Studio 54, the queens will need to construct garments using fabric provided by Mood (thanks, Mood!).

In the workroom, Bebe struggles to assemble the base of her garment, so deft seamstress Aja lends a hand. Shangela, every bit of a sewing novice as she was when she competed years ago, is at a complete loss. Trixie tries to lend a helping hand, but Shangela can’t even get her fabric choice right. It’s a mess.

Kennedy and Ben clash over an elimination strategy. Ben tries to go all Beautiful Mind about formulating some algorithm they all agree on to choose eliminated queens based on challenge wins, etc., but Kennedy is having none of it. Ben wraps the entire conversation in her usual concern for fairness. But let’s be real, people. Ben knows that she is currently the biggest threat in this competition and what she’s really looking for is everyone to promise that if she slips up one week, they will consider her prior performances and keep her. Not happening, baby girl, but good on you for trying.

The runway itself is a flop. The soup cans, which look like they were designed with a Greetings Workshop CD-ROM, are bulky. Worse yet, the queens all do these strange voiceovers that dull the entire runway experience (and don’t give guest judge Tituss Burgess nearly enough opportunity to showcase his wit and charm).

The second looks are even worse. There’s a nice homage to Bianca Jagger having the ladies enter on a white horse, but other than that, it’s a big miss. Again, the queens do a bizarre voiceover. I’ve often theorized that all these kinds of scripts/lyrics are always written using some kind of Mad Libs template, but this one is particularly nonsensical. Trixie and Ben make the most of the absurd format, while Kennedy, Bebe and Aja sound like they’re recovering from a traumatic brain injury. Shangela, of course, leans on Halleloo and revisits her Mariah Carey impression from a few weeks ago.

That white stallion better watch out, because Shangela hasn’t met a dead horse she won’t beat.

The judges praise Trixie’s branding and sewing skills. They heap lots of inexplicable praise over Bebe’s performance and bedazzled gown. Kennedy misses the mark by playing a granny character for her branded soup presentation, but her flawless hair and makeup durig the disco look more than compensates. Ross lays into Ben for merely giving 100 percent instead of her usual 120, which seems more than a little unfair when Bebe has been giving a steady 40 percent this whole time. 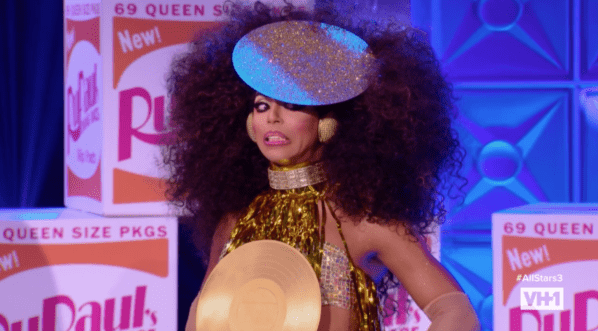 The bottom two are Shangela and Aja, each struggling with different elements of the challenge. Shangela’s look is something I could have made, and I can hardly dress myself. It’s just a few streamers and bizarre gold records plastered down the front. I disagree that it’s the WORST thing to walk the Drag Race runway, but it ain’t good.

Aja, on the other hand, creates a beautiful, if not somewhat anachronistic, disco look, but completely drops the ball on her soup branding. (It never sounds less dumb to describe this challenge.) When Bebe steamrolls her convo with Aja backstage, the writing is essentially on the wall.

Trixie and Bebe lip sync to Diana Ross’ “The Boss,” and it’s a clash of styles that actually feels like it clashes with the music as well. Trixie does an endearingly dorky performance decked out in her pink country plaid. Bebe does, well, Bebe. But that’s enough for the judges, who award her the win and the ability to send Aja packing.

We get one more post-elimination Handmaid’s vignette, and, as predicted, the pay-off hits next week. They bring out three hooded queens onto the runway, two of which (according to my very scientific tattoo comparisons) are Chi Chi and Aja. The third should be the recently eliminated Milk, but looks to have too small a frame, so my guess is Morgan. We’ll see how it plays it out next week. 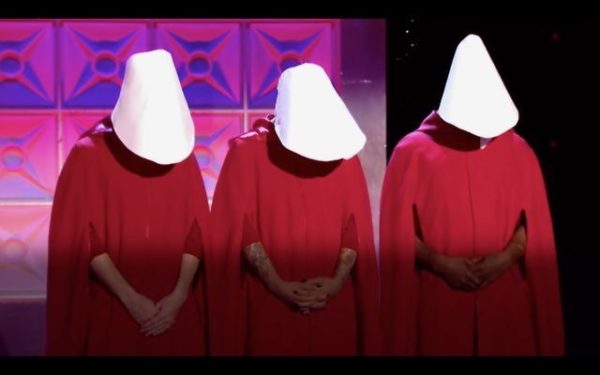 We’re at the halfway point now. Checkout our rankings below, and leave yours in the comments!

1. Oh, there was some Ben fatigue this week, but it was from the judges, not DeLa sleeping on the challenge. Ben’s soup presentation was one of the strongest, both in terms of visual branding and voiceover. Her surrealist interpretation of the Studio 54 runway narration (including Baby Jessica and Taco Bell chihuahua references) had the most fun with the form. Plus, it had the best joke of the night referring to Stevie Wonder comparing DeLa to Michelle Visage. Chicanery and producer meddling is the only explanation why Bebe took a top spot, and Ben was merely safe.

2. Shangela’s trip to the bottom this week feels like a fluke. She earned her spot in the bottom two, for sure, but this is something she can and will bounce back from. Thank goodness Shangela is as warm, charming and high-energy as she is, because otherwise she’s basically a living word cloud: fish, Daenerys, Mariah, HALLELOO, over and over forever. Yes, it’s a little egregious she still doesn’t know how to sew, but some people just don’t have that skill, despite their best efforts. It’d be utterly unforgivable on Project Runway, but here, at this point in the show’s evolution, I’m less mad about it.

3. And thus, Trixie has been redeemed. Was this the best of Trixie? Not by a long shot, but she was working within the confines of this bizarre challenge. It was good enough for producers to tell a comeback story for the beloved queen. I thought her pink jumpsuit on the runway was a little pedestrian, but I guess being able to single-handedly make something look so mass produced is sort of an accomplishment? Her lip sync against Bebe failed to inspire, but I’m happy to see Trixie successfully bring some confidence and personality to the runway.

4. At this point, Bebe better be some kind of spy, because that’s the only way to justify her win this week. The way the judges fawned all over her utterly predictable soup can design and straight outta Hobby Lobby gown made me feel truly gaslit. Bebe is great when she’s doing Bebe, but has she done anything but Bebe this whole time? I desperately want to be gagged by Bebe, but it just hasn’t happened yet.

5. Kennedy is capable of high highs, but she never can sustain that level of performance. Dressing as a granny was a bad choice, but beyond that, what was that narration to her Studio 54 runway? I actually couldn’t follow what she was even talking about. Michelle Obama? Miranda Priestley? A British ambassador? Gurl, are you OK? I appreciate her behind-the-scenes savagery though, so here’s hoping she sticks around at least a little longer. 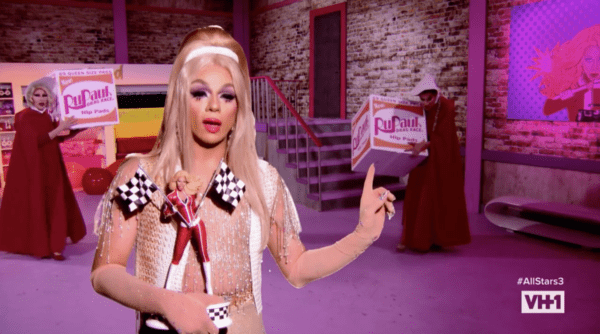 6. More than anyone else, Aja leaves All Stars much better than she entered. She got to show off a higher level of proficiency with makeup, wardrobe and performance. The problem with Aja is that she is often very successful at executing what she sets out to do, but she’s usually trying to do the wrong thing. She successfully carried out her vision for “The Bitchelor” challenge. It was just the wrong vision. Same tonight. She gave us Brigitte Bardot hair, but Brigitte Bardot was not disco. She wanted to give us sweetness in her soup, but the judges didn’t want that from her. The result is a queen that’s showcased so much talent, but just needs a bit more seasoning and maturing. Hey, who among us were at our best at 23? Aja will continue to grow.