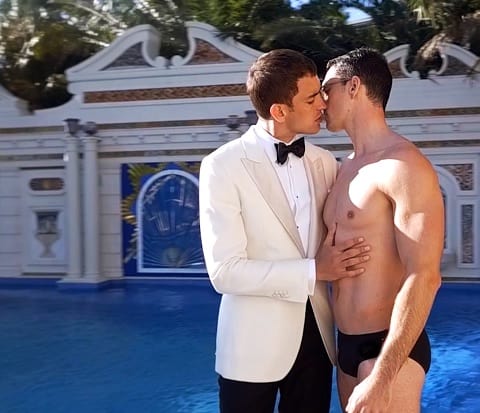 Suitsupply, an international men’s tailoring brand, unveiled their campaign online and in its 91 stores across 22 countries earlier this week.

However, while many people praised the campaign, not everyone was in agreement.

The company has received multiple, critical responses on social media for putting homosexual imagery in its adverts.

NRC Handelsblad, a Dutch newspaper, reported on Wednesday evening that the company has lost more than 10,000 followers on its Instagram profile after the publication of the adverts.

Before launching the campaign, Fokke de Jong, the founder and chief executive of the brand, said: “The attraction between people is an important part of fashion advertising.

“A campaign featuring the attraction between men was long overdue and particularly relevant for our brand.”

De Jong admitted that the company might receive criticism.

“We do believe there is potential for negative impact, especially in countries where we have a significant presence, that are known for contrasting viewpoints.”

In 2016, the company was criticized for an advert featuring men playing around on giant, half-dressed women.

Back in 2010, Suitsupply was told to remove posters from their display windows in a west London mall.