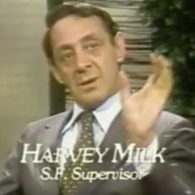 The name change is five years in the making, the San Francisco Examiner reports:

The legislation requires the director of the airport to report to the Board of Supervisors and the Mayor by Dec. 1 “describing the steps the Airport has taken and plans to take” to name the terminal after Milk and publicize it.

[Supervisor Hillary] Ronen said she also plans to amend the legislation to require the director to submit to the Arts Commission a plan for placement of artwork memorializing Milk in the terminal by September or October.

“In order to honor one of the nation’s great gay leaders, raise awareness of the history of the LGBT movement, and give hope to young LGBT people in cities everywhere, the Board of Supervisors finds it fitting that a terminal at the San Francisco International Airport be named in honor of Harvey Milk,” the legislation says.

A proposal had circulated years ago to rename the entire airport for Milk but it faced much more opposition and opinion as renaming an entire airport becomes a national issue, said Ronen.

The legislation is expected to go before the full board on April 3.

Previous Post: « Matt and Dan Talk About the Sex They Just Had: WEB SERIES
Next Post: Stephen Colbert Hits the Gym with Ruth Bader Ginsburg: WATCH »