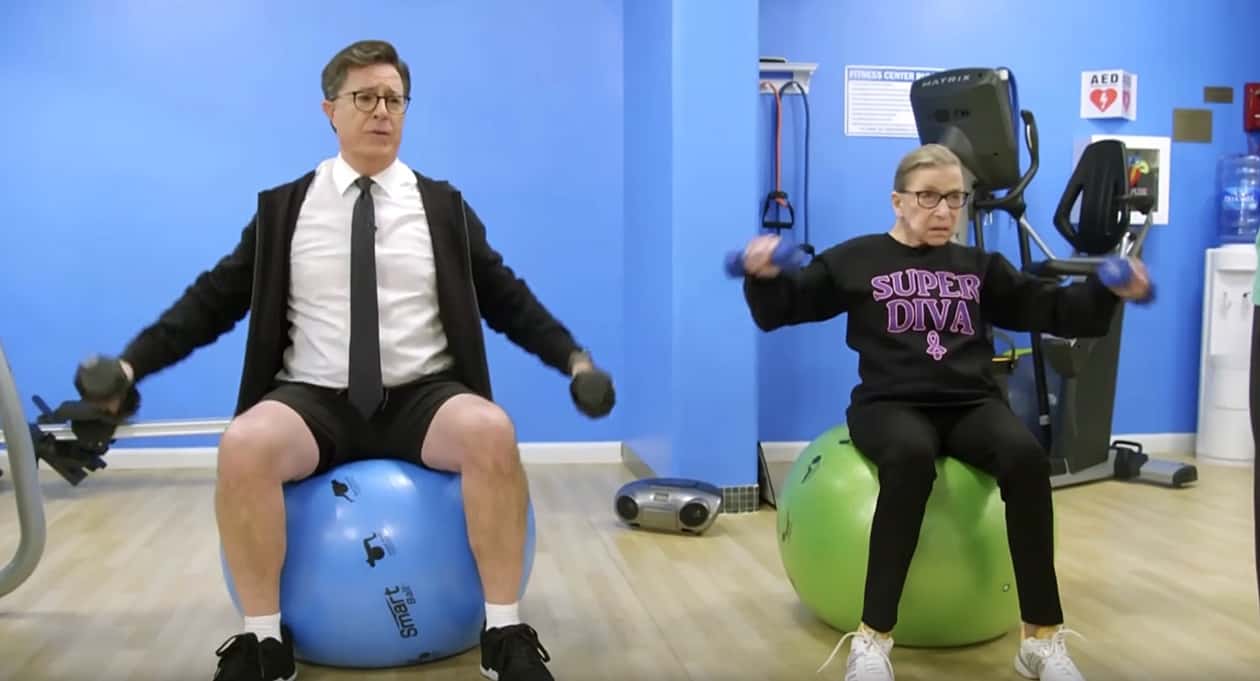 Those of you with workout excuses should have none after watching this surreal and hilarious video of Stephen Colbert getting jacked with 85-year-old SCOTUS Justice Ruth Bader Ginsburg.

Colbert headed to D.C. to visit with Ginsburg, who says she has no interest in retiring.

“Just hang in there for 3 to 7 more years,” said Colbert, flashing a photo of Trump on the screen. “But that will  not be a problem because she stays in shape because her workout is super hard.”

Ginsburg, aka the Notorious RBG, wore her ‘dissent collar’ after Donald Trump’s election as president.

If you’ll recall, the Justice wore her ‘dissent collar’ after Trump’s election as president. Ginsburg has said she wears the collar when she dissents from a majority opinion the Court has issued.

Colbert and Ginsburg talked about her ‘Notorious RBG’ moniker, the definition of sandwiches, the rumor that she’s in the new Ocean’s 8 movie, and C + C Music Factory (she’d “never exercise to that noise”).

Ginsburg is also the subject of RBG, the must-watch Supreme Court documentary of the year, profiling the  “Hero, Icon, Dissenter” who does 20 push-ups three times a week according to her friends (and more than that, according to the video above.

RBG recently said that the Supreme Court’s current term would be momentous:

“There is only one prediction that is entirely safe about the upcoming term, and that is it will be momentous,” the 84-year-old said at Georgetown Law on Wednesday. She pointedly dubbed herself the “flaming feminist” in response to a question about her background fighting for liberal causes.

American liberals will be counting on Ginsburg to hold her ground as the high court takes on major cases this year, including the hot button case of a Colorado baker who refused to create a wedding cake for a gay couple on the grounds that being forced to legitimize a same-sex union violated his First Amendment rights to religious belief and free expression.

Previous Post: « San Francisco Planning to Rename Terminal 1 at SFO After Harvey Milk
Next Post: Trump Brags He Would Send Joe Biden ‘Down Fast and Hard, Crying All the Way’ »