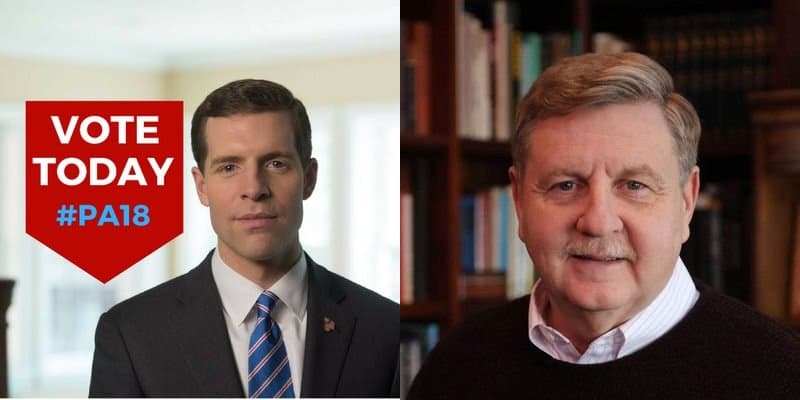 Leading by 641 votes with 99 percent counted, Democrat Conor Lamb (above, left) is the apparent winner in a Pennsylvania special election for the state’s 18th congressional district, where Donald Trump traveled in recent days to stump for Republican Rick Saccone.

[Lamb was leading] a district long held by the GOP and one that President Donald Trump — who backed Saccone — carried by 20 points in 2016.

Lamb declared victory early Wednesday morning. Saccone has not conceded and his campaign is in touch with legal counsel.

Shortly before 1:00 a.m., Lamb was introduced as “congressman-elect” at his election night party.

“It took a little longer than we thought, but we did it!” Lamb told cheering supporters.

Lamb, 33, was already looking ahead to Capitol Hill, saying, “Our job in Congress is to attack the problems, not each other.”

Earlier, Saccone, 60, addressed his supporters and stopped short of any declarations.

One county in the four county district has not yet counted absentee ballots. The possibility of a legal challenge from the election’s apparent loser still weighs.

The NYT said it was too close to call:

In 2016, Mr. Trump won the district by double digits, but the race between Conor Lamb, a moderate Democrat, and Rick Saccone, a Republican, had become unexpectedly competitive.

Whoever wins will have to decide soon which district to run in this year. The State Supreme Court threw out Pennsylvania’s current congressional map and recently issued a new map with redrawn boundaries. Tim Murphy, a Republican, resigned from the seat last year after reports that he encouraged a woman, with whom he had an affair, to have an abortion.