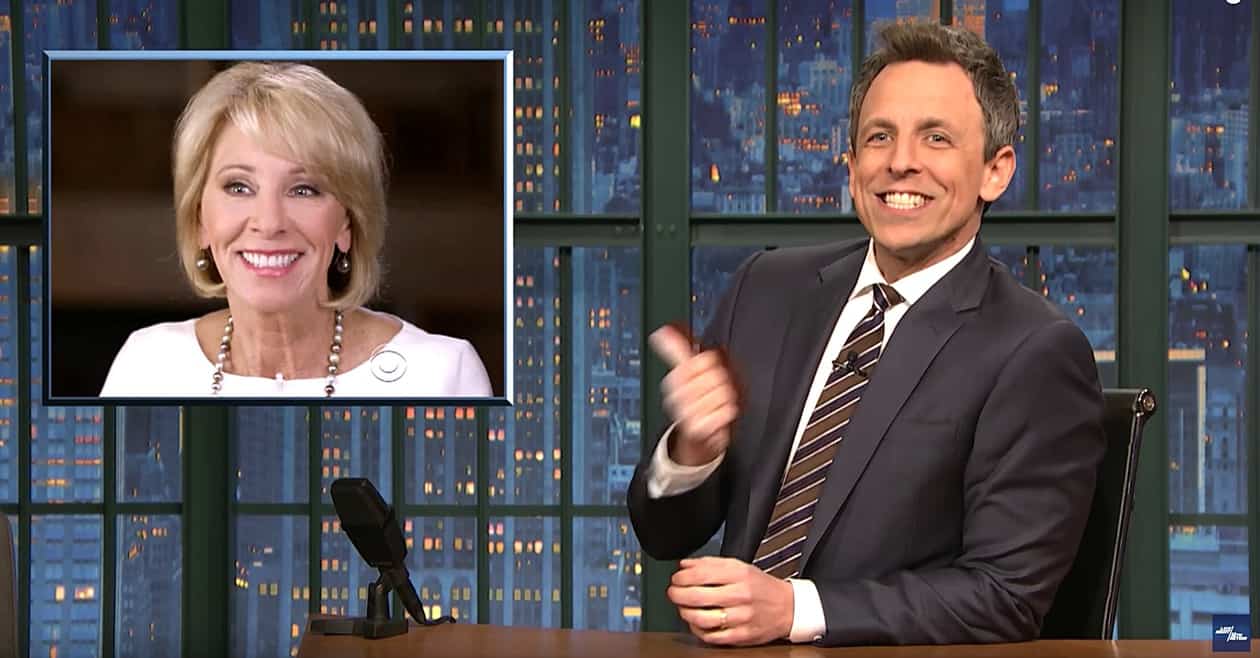 Seth Meyers examined the latest goings-on in Trumpland last night, starting with a look at Trump’s unhinged Pennsylvania rally, where he went ostensibly to support Republican Rick Saccone, but ended up hardly mentioning him.

“Trump’s like the friend that you invite to your karaoke birthday party who shows up late, doesn’t bring a gift, and then sings ‘Stairway To Heaven’ ten times in a row.”

At the rally, Trump implied he’s got dirt on Oprah (“he talks about Oprah the way Lex Luther talks about Superman”), called Chuck Todd a “sleeping son of a bitch,” and accused Maxine Waters of being “a very low IQ individual.”

Quipped Meyers: “F minus. F minus. She’s the highest ranking education official in the country and she acts like the substitute teacher who’s just realizing her U.S. history isn’t up to speed.”

Meyers then headed back to Trump’s behavior at the rally.

“Trump is, of course, so obsessed with earning the praise and validation of the media, that at one point during his rant on North Korea, he literally just started rambling nonsensically about President Obama, claiming Obama would not have been able to arrange a meeting with Kim Jong-un.”

Added Meyers: “Just mumbling Obama’s name — like ‘Obama’ was the name of his childhood sled. His presidential diaries are going to look like the manuscript from The Shining. Of course, one major difference between Obama and Trump is that for Trump the presidency isn’t actually a job, it’s just a performance. And on Saturday, he defended his performance by playing make believe on stage and acting out what it would be like if he were less unhinged and more subdued as president.”

Meyers then played a clip of Trump mocking a real president by acting presidential.

“I have to say, he might be the only white comedian who does a white guy voice…But Trump’s ranting about North Korea and being presidential tells us a lot about his shock announcement last week that he had agreed to a summit meeting with Kim Jong-un. Now it’s undeniably better to be on a path toward peace than a ramp-up to war. And if Trump somehow manages to fall ass-backwards into a peaceful resolution with North Korea, then that is absolutely a good thing. And if that happens, I will be the first to admit, okay, he wasn’t Darth Vader, he was Mr. Bean.”