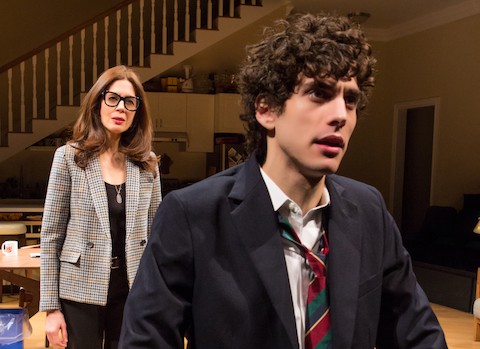 You might expect an all-white cast in a play about affirmative action to face an upward battle for audience sympathy. While the ensemble of Admissions, led by Jessica Hecht, may find open ears at Lincoln Center, where it premiered off-Broadway last night at the Mitzi Newhouse Theatre, playwright Joshua Harmon sets out for his characters a nearly impossible task.

“You can’t just keep pulling up chairs. There isn’t unlimited room. That’s like, not how tables work.” Charlie is a white high school senior who’s just been deferred from Yale — his best friend Perry, who’s mixed race, got in — and Charlie (Ben Edelman) is blowing his lid. He’s mid-rant at his parents, Sherri (Hecht), who’s head of admissions at the prep school he attends, and Bill (Andrew Garman), who happens to be headmaster. 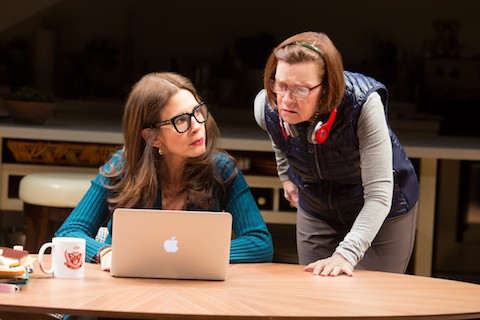 We’ve already met Sherri, in her office railing against Roberta (Ann McDonough), who’s responsible for assembling the admissions catalogue. A recurring exchange over the course of the play takes the significance of representation to its logical, and absurd, extremes. First the catalogue is too white, then it’s too diverse, until, well — no spoilers.

If balancing the makeup of elite schools can be considered emblematic of America’s struggles with racial parity, as Harmon suggests here, it’s easy to dismiss claims of victimhood from a white majority. (Set in the 2015-16 school year, Admissions makes a play for prescience.) Of course, now we know where all that leads, and the danger in turning away from it. 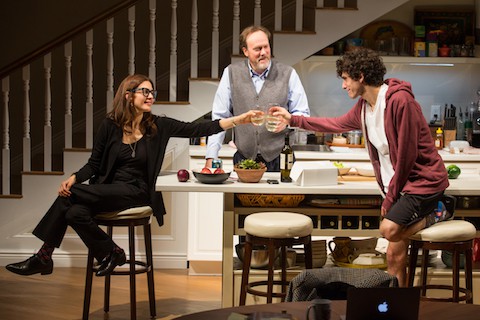 How people with privilege both orchestrate and are affected by reparative systems like affirmative action is fascinating stuff; but layering different perspectives into a single family and limiting the stakes to whether one (in his father’s words) “spoiled little shit” goes to Yale or Middlebury doesn’t exactly make for thrilling drama. (Daniel Aukin’s direction, which can seem like a game of musical chairs, doesn’t much help.)

Aside from Bill (who, as evidenced above, at least has his head on straight), Harmon’s other characters practically beg to be loathed. Charlie especially so, despite an abrupt (and totally unexplained) about-face on his entire worldview midway through. (Teenagers!) Similar to Harmon’s young gay protagonist in Significant Other, Charlie’s neuroses are relentlessly narcissistic to the point that he seems insufferable, even for an over-privileged teen. 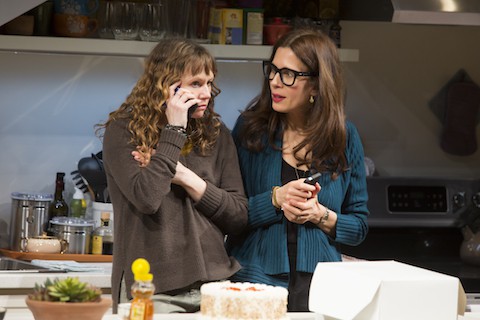 That it’s impossible to root for Charlie may be the point, but it makes you wonder: How would Perry respond to hearing his best friend rage against the injustices of being white? We can only guess. Instead, we hear from Ginnie (Sally Murphy), Perry’s white mom, whose self-righteous race consciousness itself comes cloaked in a hippie brand of suburban whiteness. (“This place is so white!… Drives me insane. Ugh.”)

Harmon’s myopic focus on white points of view seems meant to hold up a disturbing mirror to liberal elites, at the risk of alienating those who so often are, anyway. But if resisting interracial confrontation is a deliberate choice, it’s one that keeps Admissions’ drama deferred, indefinitely.

Recent theatre features…
In Stunning New Play ‘queens,‘ Coming to America and Learning to Let Go: REVIEW
Jomama Jones Is a Spiritual Mother for the Moment in ‘Black Light’ at Joe’s Pub: REVIEW
An Outdated Rerun in Off-Broadway Bow of ‘Jerry Springer: The Opera’: REVIEW
Eve Ensler Returns With Breathtaking Solo Show ‘In the Body of the World’: REVIEW
‘Cruel Intentions: The Musical’ Is a Wicked Delight for ‘90s Lovers: REVIEW
How to Save Civilization from Certain Disaster? Take a Cue from ‘SpongeBob’ on Broadway (Yes, Seriously): REVIEW
In Broadway Revival of ‘Once on This Island,’ a Modern Fable, Beautifully Told: REVIEW