In a new series of late night tweets, Roseanne Barr blamed her racist Twitter tirade on the sleep drug Ambien.

Tweeted Barr (now deleted): “guys I did something unforgiveable so do not defend me. It was 2 in the morning and I was ambien tweeting-it was memorial day too-i went 2 far & do not want it defended-it was egregious Indefensible. I made a mistake I wish I hadn’t but…don’t defend it please. ty”

Twitter (and Ambien) users were quick to clap back:

If Roseanne’s excuse is true, those tiki-torch-wielding Charlotte marchers must have all been tripping balls on Ambien.

She added, in another deleted tweet: “I think Joe Rogan is right about ambien. Not giving excuses for what I did(tweeted) but I’ve done weird stuff while on ambien-cracked eggs on the wall at 2am etc -” 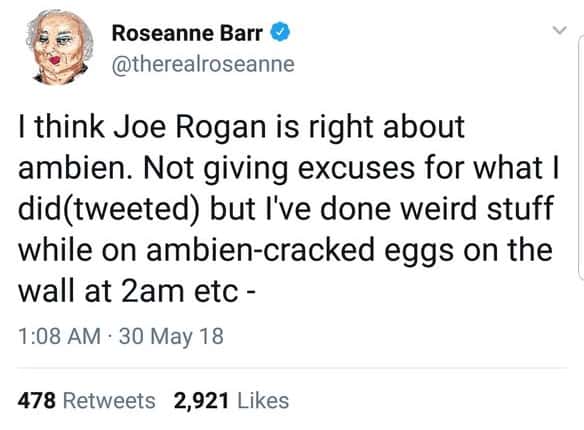 Barr later tweeted: “hey guys, don’t defend me, it’s sweet of you 2 try, but…losing my show is 0 compared 2 being labelled a racist over one tweet-that I regret even more.”