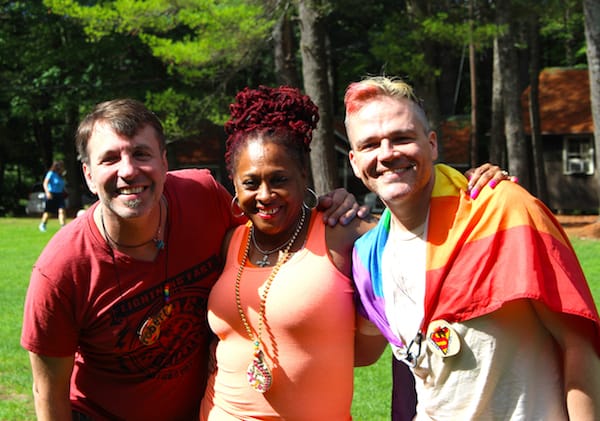 Pride may feel like the official kickoff of summer, but the spirit of community doesn’t end when the last float makes its way down the parade route. LGBT vacationers can keep the magic going with an unforgettable summer camp experience at ‘Camp’ Camp.

The weeklong getaway gathers a diverse community of adult LGBTQ campers to reimagine the traditional sleepaway camp experience with a big, gay twist.

From arts and crafts to capture the flag, all the familiar markers of the camp experience are there. Campers stay in cabins, share meals and form lifelong friendships all in the idyllic woods of southwestern Maine. While abandoning the day-to-day drudgery of conference calls, long commutes and the crush of social media notifications would be special enough, ‘Camp’ Camp elevates the entire camp experience for LGBTQ adults.

The meals are prepared by professional chefs; the days are packed with more than 30 different outdoor, athletic and creative activities; and you’ve never seen a talent show quite like this.

Of course, what makes ‘Camp’ Camp so special are the people. The inclusive atmosphere celebrates every stripe in the LGBTQ rainbow, welcoming campers of all gender identities from ages 21 to far into their 70s. Lip syncs, tea dances, drag and disco dominate evening programming. Introverts need not fear, though. Despite ample activities offered, participation isn’t mandatory. Campers can choose what they want to partake in or take time for themselves to just soak up the natural splendor around them.

The allure of ‘Camp’ Camp has attracted LGBTQ visitors since 1997. Over the years, a strong community has formed. ‘Camp’ Camp boasts a 75 percent retention rate, with 40 percent of last summer’s campers having joined for five years or more.

One of those campers is 30-year-old medical writer Shawn Jordan, who will be returning to ‘Camp’ Camp for his seventh summer this year.

We spoke with Shawn about what makes the ‘Camp’ Camp experience so special and what new campers should know before arriving for “the best time ever.” 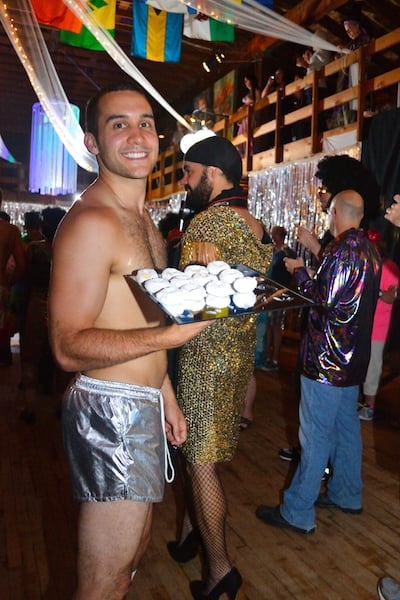 Do you remember the moment when you first really felt Camp was for you?

I remember it was maybe half-way through the week. I had been so busy. Especially during my first year, I had been so keen on doing every activity I could possibly get to. It’s tough, because there is so much stuff to do, and it all sounds super fun.

I managed to carve out some time to go and just sit down at the waterfront, sort of off to myself for a bit, just to quiet my mind and take stock of where I was in the week and what it was like to be in that space. I remember at first the solitude of that moment, the peace of being alone in nature, seeing the lake before me, watching these loons out on the water so peaceful.

Then I started noticing what I was hearing was all the sounds of Camp, people laughing in the distance, the sounds of people making chain mail off somewhere, people cheering for someone coming down the zipline. It really reinforced the community aspect of the space and just how positive and affirming it is to be there. That’s when I was totally hooked. 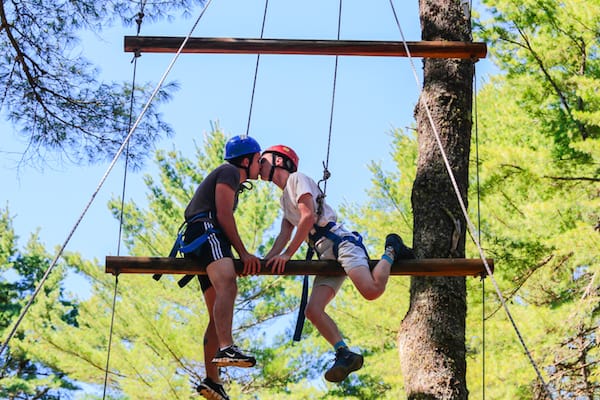 What surprised you most about your experience at ‘Camp’ Camp?

It showed me really how diverse our community is. It’s something I knew before, but I never got to see and experience and be a part of. To combine that with just how much fun it was to be there in the first place. That was the biggest surprise for me. I was just kind of like wow this is amazing. For me growing up, it took a long time for me to come out and be comfortable with my sexuality. So to now be a part of a community that celebrates that aspect of ourselves with such audacity and happiness? It’s just amazing, really, it’s amazing.

What are some of your favorite activities?

For me, the go-to activity that I will not leave camp without doing is the adventure course. It’s like a high ropes course. You get to be up in the tree, strapped into these harnesses and climbing these rope elements. You get to go down the zipline at the end. It’s just an adrenaline rush, coupled with an intimacy with the nature that’s around you.

Some of the more creative stuff I’ve really, really enjoyed too. The stained glass making was one thing that surprised me. It’s something I’ve never, ever done before. I went to this class, I was met with really, really inviting instructors that made me feel comfortable and capable. I ended up leaving with a couple of pieces I still have hanging up in my apartment, and I’m so proud of them, because I made them. I made them in a space that brings me so much joy. 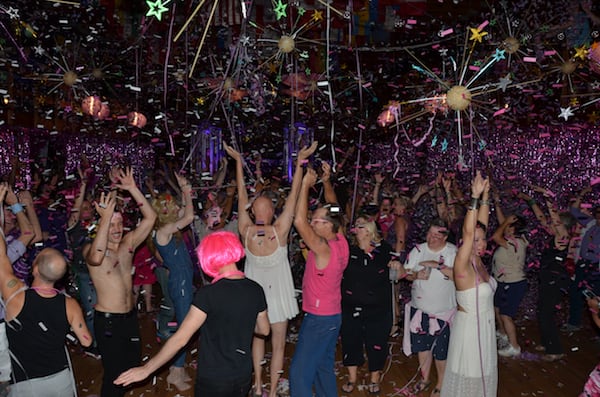 In addition to all the activities during the day, all of the social events every night are so much fun. We have a tea dance every year, which for the cabin I stay in, is THE event of the week. We all get dragged up for it. It’s a great bonding experience for our cabin especially because we’re all going with a singular theme. We’re all helping each other get into our costumes and come up with our concept. It reinforces this amazing little family that we have within the broader community.

My husband, he also really loves doing the ropes course. We’ll often try to challenge ourselves by doing something extra to make it a bit tougher. There was this one year that we were bound together, we attached our harnesses, and we were climbing side-by-side through the entire thing. When we were up at the top we were just higher than everything, because we worked so hard to reach that point together and supporting each other. It was an amazing reinforcement of our relationship. We got to share this kiss at the top, and someone snapped this picture of it.

If they’re doubting it, just do it. Just take the leap and immerse yourself into it. I guarantee once you’re there, you’re not going to want to leave. I think the biggest hurdle people have is getting caught up in their own misconceptions about what the experience will be like, and that paralyzes them not to do it in the first place. I know a lot of people who are now longtime campers that had that experience before they came.

On a more practical level: Bring lots of costumes. Bring some flair, because it’s a fun time to dress up and get crazy and goofy.