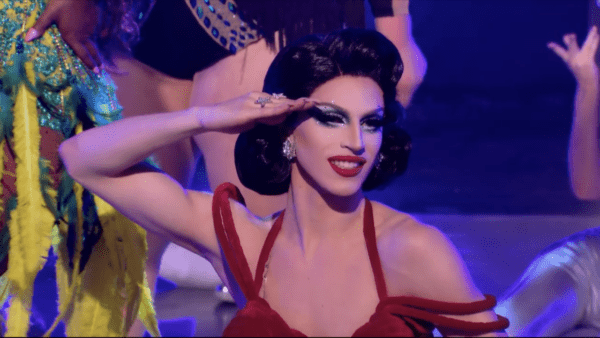 It’s the final four henny, and there’s not a moment to waste. Season ten of RuPaul’s Drag Race is winding to a close, and it’s a fight to the finish.

Before we can even de-geish from our evil twin garb, the claws are out. Asia feels badly about being so harsh about Cracker’s lack of star power (though in interview she admits to still feeling some kind of way, #sorrynotsorry). Something has got up in her tuck, because she’s throwing shade at Eureka as well. Maybe she’ll feel better once she gets that Babadook makeup off.

When the remaining girls arrive the next time, it’s time to get right into the maxi challenge(s) of the week. The final four will each write and record a verse for RuPaul’s track “American,” learn some intense choreo and guest on Ru’s What’s the Tee? podcast.

This sort of final gauntlet really does usually showcase the queens’ true star potential, but we mostly know by now that Ru ain’t gonna send anybody home at this point.

The recording sessions all seem to be pretty rough. They’re in “the studio” with Todrick Hall and Ru’s producers, Kummerspeck, which sounds way dirtier than it needs to.

Todrick actually does some of the best coaching here. He is tough with all the girls (they need it), but he’s giving very actionable (very correct) feedback. He pushes Aquaria and Kameron to go up an octave, and he drills Asia and Eureka to get on beat. Kam has the best voice of the bunch by far, but we all know this is all going to be auto-tuned so hard, it might as well be a duet between Siri and Alexa. (Vocoder, something I can believe! The answer is technology!)

The podcast chats felt equally as evenly split. I miss the tongue-in-cheek Tic Tac lunches of seasons past, where a little levity went a good long way. Now, they just feel like a chance for Ru to workshop some more of her pop psychology. And, look, I love RuPaul, and I typically am very moved and inspired by all her words of wisdom, BUT you can’t tell me “The dark night of the soul is the passageway to the other side” doesn’t sound ludicrous. What an unnecessary metaphor! There are already so many existing aphorisms to communicate that idea!

Of course, paying tribute to Mama Ru is really part of the challenge, so I don’t blame Asia for threatening to tattoo her body with Ru’s reminder to “Remember who are.”

When introing the challenge, Ru promised the hardest choreography of the season, and that is no b.s. Todrick puts the ladies through their paces, and it’s the first time where it seems like we’re not getting the traditional “anyone’s game” edit common for a penultimate episode. Aquaria and Asia pick up the challenging choreo, but Kameron and especially Eureka really struggle.

In a cute moment, Aquaria breaks down in tears just overwhelmed with excitement for this moment. Of course, everyone wants to win this thing, but her awe and wonderment strikes me as so endearingly sincere.

The actual performance is a dizzying spectacle. The camera work is much more fast and frantic than even All Stars 3 live, one-take final video. Every queen sounds great on the track; their lyrics showcase personality and are just earnest enough; and the choreo is just as impressive as promised. It’s another Drag Race classic.

The judges’ critiques are more of a retrospective, and, honey, I’ve recapped it once already. The praise is pretty evenly distributed between all four queens. Ru also pulled out a few of the usual tricks: give advice to your younger self, why do you deserve to win, etc. Everyone sheds the requisite tears and feels very sincere, but, still, none seem to outshine the rest.

The final challenge is a four-way lipsync to RuPaul’s “Call Me Mother.” (Somewhere Azealia Banks squeezed a wine glass until it shattered in her hand.) Since they’re all decked out in gowns, no one is going full-out, but they all serve some serious face and oral precision.

Not like it matters. Ru keeps them all and sends all four to the finale! Who will snatch the crown in two weeks? (Next week is a reunion special.) We’ve got out rankings below, leave yours in the comments!

1. If we’re basing the winner strictly on their performance throughout the competition, Aquaria should take it all. She never landed in the bottom two; Ru says she’s one of the Top 5 look queens; and she actually out-performed most of the girls in the acting/comedy challenges. She got a real rough edit early on, but her awkward demeanor became more and more endearing as the weeks wore on. She clearly has a passion for this business, and she’s put the work in to study her craft. Of course, there are other more nebulous factors to take into account. Will Ru reward someone who’s displayed more “growth” throughout the competition? Will the format of the finale (like another Lip Sync battle) favor another queen? Also, will they crown a third New York City queen?

2. Asia has had her ups and downs, but we haven’t seen a showgirl like her crowned since season two winner Tyra Sanchez. More than the Other Tyra, Asia is a pageant girl that really pushes her lewks into interesting directions. She stunned in her dandelion headpiece and her Tweety ensemble. She whiffed the ball and stunk up Snatch Game, but she also shined bright in the dating app challenge, makeover week and the good/evil twin runway. She’s not the runaway favorite Aquaria (or even Eureka) can be considered, but she’s fierce as hell and would be a worthy champion.

3. Honestly, Eureka probably has more of a shot than Asia, but I was just a touch disappointed with her this episode. I thought her lyrics and her final runway, while both clever, didn’t WOW me the way the others did. However, she’s been a strong performer this entire competition, she has a pretty solid built-in redemption narrative that makes great TV and we are long past due for a big girl to win it all. The judges have also seemed to have let a lot slide from Eureka. (That Frankie Grande makeup was criminal.) Still, she’s a unique queen that has really figured out who she is. She’s campy and glam and impossible not to watch on the stage. She’s A LOT offstage, but, as we all know, this is not RuPaul’s Best Friend Race.

4. It’s easy to imagine Kameron being the first queen knocked out of the top four. However, especially if we’re dealing with a lip sync-focused finale, Kameron could shock us all. For all her struggles, Kam has proven to be a high-octane performer with a refined aesthetic. She’s got charisma (onstage at least), a unique look and tons of talent, it’s her nerve that suffers. It’s been a struggle to watch Kam battle her own insecurities this season, but how many of us could relate? She is royalty-worthy, but I can’t really see her being rewarded by Ru after being so guarded on-camera.