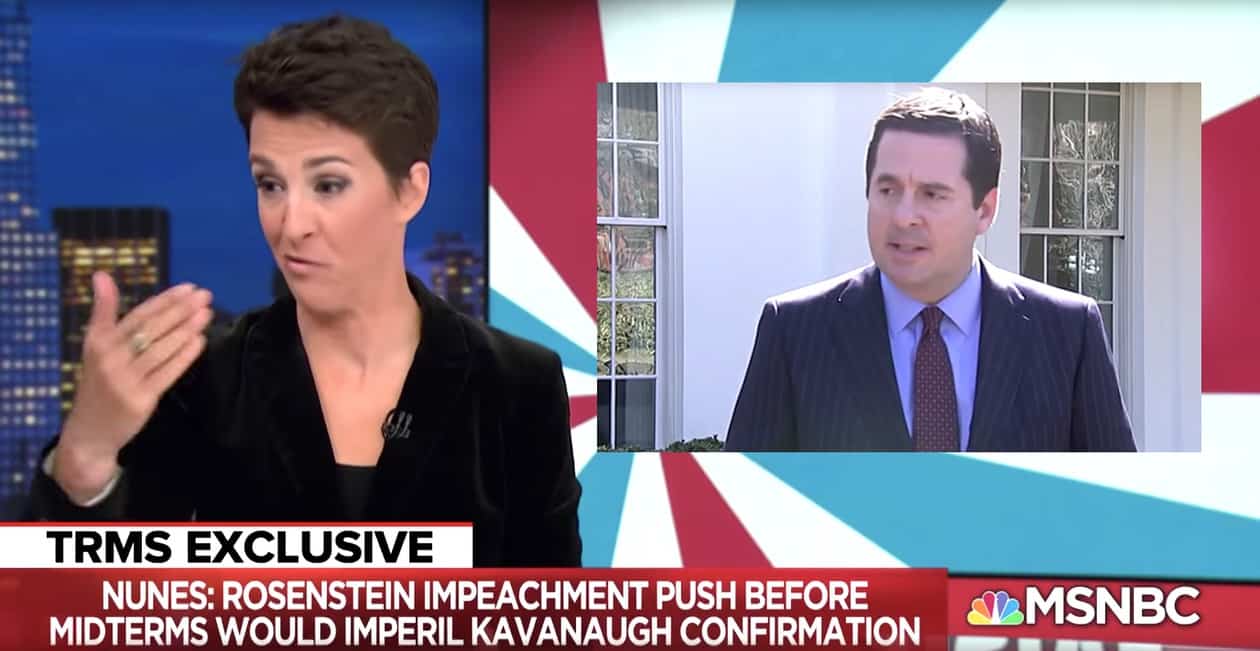 The recording was made by FUSE Washington, a progressive group who paid someone to attend the fundraiser.

In one part of the recording, Nunes says that Trump’s tweets make him “cringe”

Said Nunes: “They know it’s ridiculous to go after the President for obstruction of justice…But if they tell a lie often enough and they put it out there and they say, ‘Oh, we’re looking at the tweets,’ and you know you’ve got a mixed bag on the tweets, right? Like sometimes you love the president’s tweets, sometimes we cringe on the president’s tweets….But they’re trying to make a political, this is all political as to why that story ran in the New York Times on the tweets.”

Maddow noted that Trump will probably take issue with this.

In the remarks Nunes also discussed the subject of collusion, using Portugal as a hypothetical example, noting when it would be a criminal act.

Said Nunes: “Now if somebody thinks that my campaign or Cathy’s campaign is colluding with the Chinese, or you name the country, hey, could happen, it would be a very bad thing if Cathy was getting secrets from the Portuguese, let’s say, just because I’m Portuguese, my family was…But ultimately let’s say the Portuguese came and brought her some stolen emails, and she decided to release those. Okay, now we have a problem, right? Because somebody stole the emails, gave them to Cathy, Cathy released them. Well, if that’s the case, then that’s criminal.”

Said Maddow: “It cannot help that the lead opponent of the Russia investigation privately concedes when he thinks nobody is recording him, that that sort of activity when proven would be criminal.”

Maddow then played part of the tape that revealed there is a clear intention, despite public denials, on the part of top House Republicans to impeach deputy attorney general Rod Rosenstein, who is overseeing the Mueller probe.

“It’s a matter of timing,” said Nunes at the fundraiser.

Added Nunes: “I’ve said publicly Rosenstein deserves to be impeached. I don’t think you’re gonna get any argument from most of our colleagues. The question is the timing of it right before the election.”

Nunes objection to the timing was that “the Senate would have to drop everything they’re doing and start to, and start with impeachment on Rosenstein, and then take the risk of not getting [Trump SCOTUS nominee Brett] Kavanaugh confirmed.”

In another portion of the tape, Nunes warns that they either need to stop the Mueller investigation or impede it and need the majority to do that: “So therein lies, so it’s like your classic catch-22 situation, where we were at a — this puts us in such a tough spot. If Sessions won’t un-recuse and Mueller won’t clear the president, we’re the only ones — which is really the danger. That’s why I keep, and thank you for saying it by the way, I mean we have to keep all these seats. We do not keep the majority, all of this goes away.”

Previous Post: « Jeff Sessions Slammed After Telling Anti-LGBTQ Hate Group ADF, ‘You Are Not a Hate Group’ – WATCH
Next Post: Grace Will Get a Love Interest on ‘Will & Grace’ and It’s Someone from the Cast of ‘Friends’ »