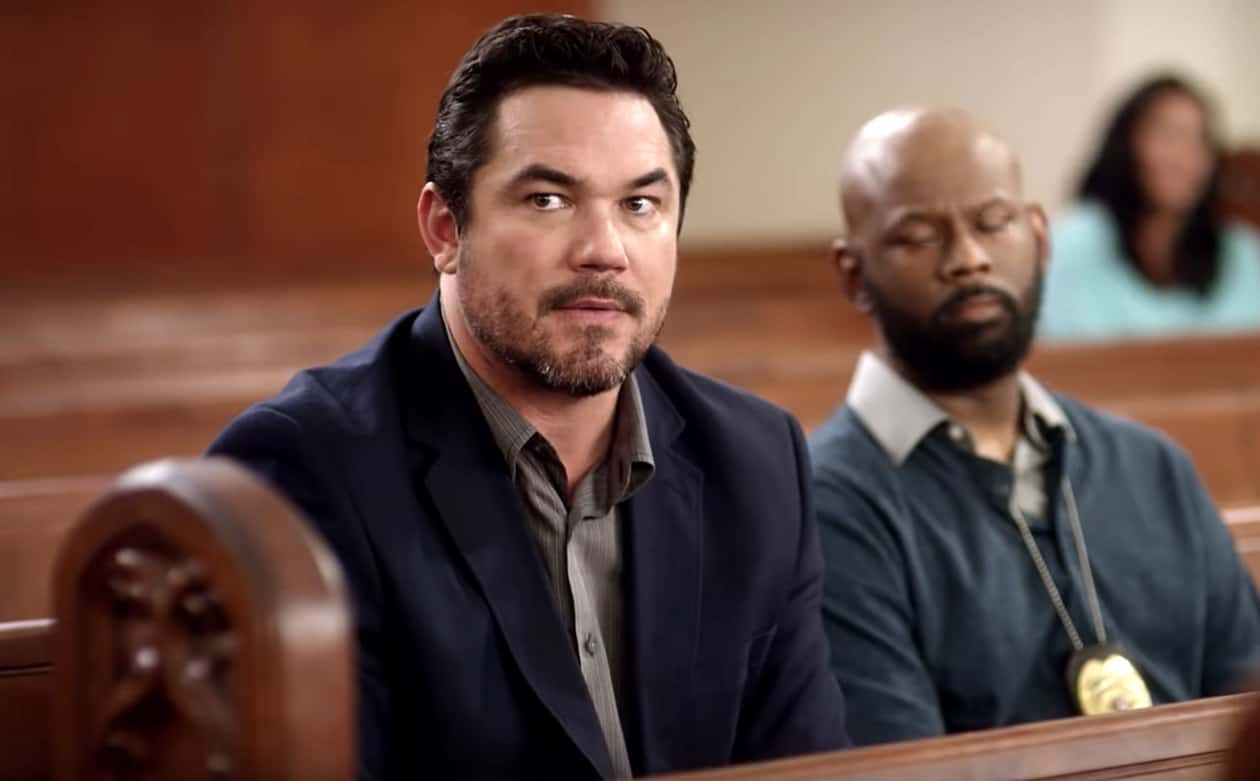 Dean Cain doesn’t get why his speaking gig Friday night for the virulently anti-LGBTQ hate group Family Research Council is a problem for someone who describes himself as a gay rights advocate. Cain came under fire on Twitter for his appearance at a special screening of his new film Gosnell for the FRC’s hideous Values Voter Summit, at which a variety of anti-LGBTQ speakers including VP Mike Pence, will appear. In the film, Cain stars as the detective who put abortion doctor Kermit Gosnell behind bars.

The Family Research Council has been designated a hate group by the Southern Poverty Law Center, which writes: ‘The FRC often makes false claims about the LGBT community based on discredited research and junk science. The intention is to denigrate LGBT people as the organization battles against same-sex marriage, hate crime laws, anti-bullying programs and the repeal of the military’s “Don’t Ask, Don’t Tell” policy. To make the case that the LGBT community is a threat to American society, the FRC employs a number of “policy experts” whose “research” has allowed the FRC to be extremely active politically in shaping public debate. Its research fellows and leaders often testify before Congress and appear in the mainstream media. It also works at the grassroots level, conducting outreach to pastors in an effort to “transform the culture.”’

Check out Cain’s exchanges with GLAAD and gay activists below.

GLAAD tried to explain to Cain why it’s a problem to support this hate group:

FRC’s president @tperkins has said this about gay people: “They are intolerant. They are hateful. They are vile. They are spiteful"…"pawns" of the "enemy.”

More on him here: https://t.co/3iTS2UMQfi

You’ll even be rubbing shoulders with “conversion therapy” activists if you go to #VVS18. https://t.co/gQrYTDQDmX

Here’s the thing, @RealDeanCain: Allies should not turn a blind eye to the people, groups, and rhetoric that propel this event. There is no event on the calendar that is more rabidly against LGBTQ people and our rights. #VVS18

Cain replied: “I hope they ask me about my support for gay rights, and the fact that I’m pro-choice. I’m happy to have that conversation. I’m not there to do anything other than discuss the film, GOSNELL. And I’m pro-choice. That will probably take-up the bulk of the time. I’m not there to preach or to lecture—I hope they ask about my support for gay rights. I haven’t studied their record. I’m speaking there. And I support gay rights. And I’m pro-choice until viability. End of story.”

I hope they ask me about my support for gay rights, and the fact that I’m pro-choice. I’m happy to have that conversation.

I’m not there to do anything other than discuss the film, GOSNELL. And I’m pro-choice. That will probably take-up the bulk of the time. I’m not there to preach or to lecture—I hope they ask about my support for gay rights. I haven’t studied their record.

I’m speaking there. And I support gay rights. And I’m pro-choice until viability. End of story.

Cain also got into lengthy exchanges about his appearance with LGBTQ activists like Matt Baume.

I’m discussing a film- and I’m happy to speak to any group. I don’t change my beliefs based on the audience. Perhaps it will spark a good conversation-

Cain told Baume: “I’m discussing a film- and I’m happy to speak to any group. I don’t change my beliefs based on the audience. Perhaps it will spark a good conversation-”

Replied Baume: ‘That “perhaps” is doing a lot of work. What are you going to say to this group to advance LGBTQ equality? Anything?’

Cain: ‘I’ll state my support, and the reasons for it. And I’ll answer any question they ask—’

Baume: ‘That sounds … vague. Any plans to actually call them out for labelling your LGBTQ fans “pawns” of the “enemy”? Or for their support of ex-gay abuse? Taking a specific, loud, visible stance against a group that harms vulnerable people would be, you know, super, man.’

Cain: ‘Matt, I don’t know the views of this specific group—I’m doing a press junket for a film. GOSNELL. Im speaking to MANY different groups tomorrow. I’m there to discuss the film and answer questions. I HOPE they ask me questions about my support for gay rights- … It’s not a speaking gig. It’s press for a film. And you should be happy I’m speaking to them—especially if they don’t support gay rights, and I do. I’ll be fighting on your side—how is that a negative? Dialogue, people, dialogue—’

Baume: ‘Do you honestly think that press junketing for some movie and hoping an anti-gay group gives you permission to talk about queer people is “fighting” on our side? That’s the most timid allyship I’ve ever heard of. What good is support if you keep it a secret when it’s needed?’

Cain: ‘Sorry, Matt. I’ll do as I please. Speak where I please, and say what I please. My support for gay rights isn’t predicated on what you want me to do. Do not lecture me. Only warning.’

Baume: ‘Look obviously you don’t owe me an explanation and I’m grateful that you’re open about all this, but I can’t see how you can expect people to consider you a supporter if you won’t do anything supportive.’

Cain: ‘If you think I haven’t done anything supportive, you’re not at all aware of my life.’

Baume: ‘I’ve seen your past interviews. I know you played gay. I’m sure you’ve donated to queer groups. Seems like it should be easy for someone who supports queer folks to say that he opposes the work of one of the worst anti-LGBTQ organizations in the country.’

Cain: ‘I would need to study their work before opposing any group. I haven’t done that in this case- still doesn’t change my support for gay rights.’

Baume: ‘Queer people are telling you this is important to them. We’ve sent you the receipts. Up to you now to do what you consider to be right.’

Another follower pointed out that Cain voted for Trump.

Sorry, Jesse— the fallacy of “guilt by association.” Your argument is 💩

Cain also got into it with activist Jeremy Hooper.

Said Hooper: “But you have to understand what sort of event this is—and what @Frcdc is all about. They are not a mere GOP org. They insist gay people can and must be changed. They have spent millions fighting us. It’s impossible to separate this press opp from the organization”

Cain: ‘I think it’s better to have a dialogue and discuss. My values and my morals are clear and open. I won’t be bullied, and I won’t be peer-pressured to conform.’

Hooper: ‘Please don’t play the “bully” card. @glaad hasn’t even suggested you drop out. We are dialoguing here, and certainly hoping you dialogue there. But first you must know what FRC is. You said you didn’t, so we are helping you understand’

Hooper: ‘I have worked with GLAAD, and many organizations. I probably know FRC better than some who work there. But I’m speaking to you as myself.’

Cain: ‘Fair. And you seem polite and reasonable, which is why I have continued speaking with you. I don’t know that organization, but I’ll be there tomorrow speaking. You should be happy to have a supporter there.’

Hooper: ‘I’m a peacemaker, not flamethrower. Well I certainly hope you take a stand. If you just take twenty minutes to research, you will understand why people are reaching out to you. This is not a run of the mill org. This is not CPAC or the RNC, even.’

Cain: ‘Jeremy. I am who I am. I’ll speak my piece. I appreciate your words and opinion.’

Hooper: ‘Sounds good. Just one more thing then I have to go. A friend of mine used to be an exec at focus on the family (yes, really). You will notice that they do not sponsor the Values Voter Summit. That’s because, as he put it: “even we know they are extremists.” Take care.’

Cain: ‘Thanks for the info and insight, Jeremy. Be well, my friend.’

Another user told Cain: ‘So basically, you aren’t actually an ally, you don’t pay any attention to the record of the people you involve yourself with, and you prioritize money over human beings. If those are your positions, what do you actually DO to support them, excluding throwing tantrums on Twitter?’

He replied: ‘I don’t get paid to promote the film. And I don’t care to listen to your self-righteous prattling. Adios.’

I don’t get paid to promote the film. And I don’t care to listen to your self-righteous prattling. Adios.