Overnight success is a myth. Great artistic success in show business generally comes from working hard and learning the craft, often for years, so that you’re ready should a big break ever come. ‘Overnight’  is only just that moment when the world suddenly notices your long-standing gifts. A Star is Born as a franchise always synthesizes this myth and this truth for something like a fairy/cautionary tale; just as quickly as a star rises, a star can fall. Talent is never the question, but the starting point; whether the world notices and for how long, is out of your hands.

The screenplay for the latest telling of A Star is Born, emphasizes this last point, as Jackson Maine (Bradley Cooper) urges Ally (Lady Gaga) to give it her all because the world might not always be listening.

For those who’ve been living under a cultural rock the story of A Star is Born is ancient and simple: One already established successful showbiz man ‘discovers’ an absurdly gifted but basically unknown female performer and takes her under his wing. They fall in love but as her fame rises, his falls, plagued as he is by personal demons in liquid form. The story never has a happy ending so if you need a good cry, queue up. 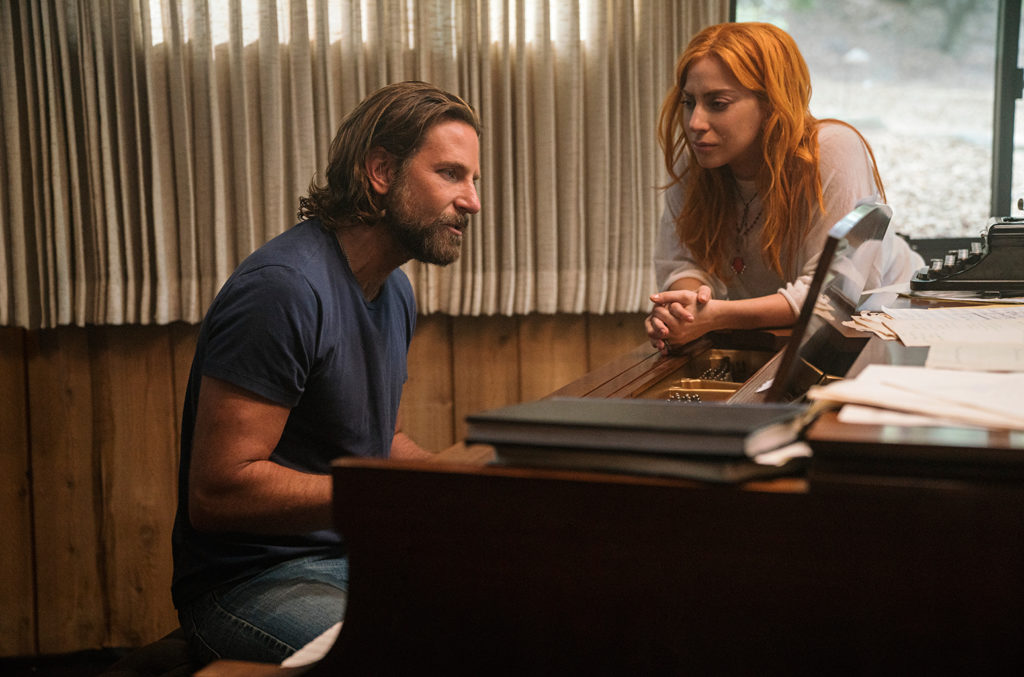 It’s easy to see why this enduring showbiz tearjerker attracts star performers who know a thing or two about life in the spotlight (Judy Garland, Barbra Streisand, James Mason, Fredric March, etc…) though its appeal to filmmakers is perhaps a bit less obvious. Enter Bradley Cooper, famous actor and now an overnight success as a director…

Cooper’s clearly been honing the storytelling side of his gifts for years on the sly. Perhaps he was purposefully hovering, soaking up the magic of multitudinous decision-making on the sets of the gifted directors he’s been fortunate to work with: Clint Eastwood (American Sniper), David O. Russell (American Hustle), and Derek Cianfrance (The Place Beyond the Pines) chief among them. There’s little other explanation possible as to how Cooper so confidently dons this new hat, born anew as a director behind the camera while simultaneously giving the performance of his career as a movie star in front of it.

Though it would be silly to say that Cooper is unrecognizable as Jackson Maine, his voice at least is totally new — to his vocal chords that is. Like a more benevolent Ursula, he’s magically stolen the voice of Sam Elliott while letting Sam Elliott keep those molasses-gravel pipes, too. In effect there are two Sam Elliotts before you since Elliott is on hand (and terrific) as Jackson’s older brother who raised this rock star and now manages him on the road. It’s a full time job given the infinite booze. Aside from the new speaking voice, Cooper has thoroughly recalibrated himself physically and emotionally never feeling anything less than authentic as a casually mega famous but frequently sozzled rock star.

Cooper’s iteration of this old story is the first time an actor has directed the material and it shows. Arguably more than the other versions –even the magnificent Judy Garland classic from 1954 —  this one conjures up a romance that’s deeply rooted in the spirit of artistic collaboration. This Star is not just concerned with the yin and yang of fresh and dimmed spotlights but in the act of creation. 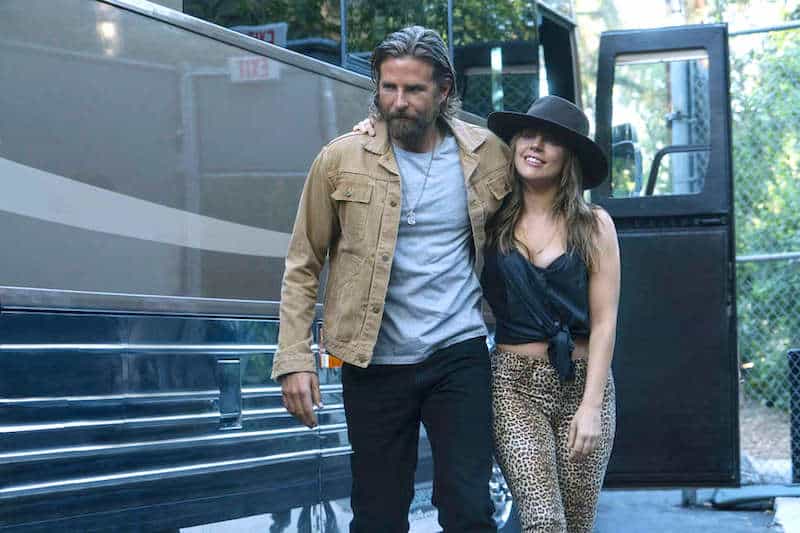 Cooper’s smart performance-focused read on the material and his generosity as an actor is obviously a huge boon to Lady Gaga as his discovery “Ally”. Gaga is still a novice actor rather than a true natural but paired with Cooper she’s relaxed and expressive and moving.  It helps of course that the role is tailored to the superstar in an almost comically meta way. She’s even cheered on by a gaggle of gays in her first big scene, then symbolically released from the gay community into the real world via Jackson Maine accidentally stumbling into a drag bar on the hunt for more booze. But this role tailoring has always been the case with A Star is Born, which lives or dies by the gifts of its female Star, the one being Born.

Lady Gaga knows what a once-in-a-lifetime gift this role is and she’s taking no chances delivering some of the best songs of her career. Lady Gaga came to slay so that “Ally” could be Born This Way.

If either Cooper or Gaga had any doubts about their ability to pull this off you’d never know it from what’s on screen, the movie operating at all times from an electric place of total confidence, even when the subject of the scenes is the lack of it. For Gaga’s part she walks this high wire with no safety net. Within the first reel of her performance she’s directly inviting comparisons to major legends.

The first time she sings, under the title card no less, it’s the seldom sung intro verse to Judy Garland’s “Over the Rainbow” which she then chases with a full performance of Edith Piaf’s signature song “La Vie En Rose.” Once she’s risked communing with those formidable ghosts, she’s talking about her nose in profile in a way that would make Barbra Streisand blush. This is a fearless performance demanding your fealty. All you can say in you seat is “yaaaas queen!” when she finally lets loose with “Shallow”.

The song is thrilling and so is the movie. Watch as these two great artists dive in. Oh, the treasures they dig up together. Once the movie lifts off (with this very song) it never meets the ground again.

An embarrassment of riches, A Star is Born delivers this moment earlier than you’d think. Before the already iconic moment when Ally blows the roof off of a Jackson Maine stadium concert with her hhaaawwwooahaaahahwoaha caterwauling — the centerpiece of the ubiquitous promotional campaign — we’re treated to a verse of the song in the humblest of ways. Ally sings a bar for Jackson in a parking lot as they talk the night away. The scene is quiet, long, and watchful, as fascinated with this nascent romance as Jackson is with this singular new woman he can’t stop staring at. The new tune is presented casually as the seed of an idea Ally has been tending to. It suddenly blooms in Jackson’s presence, one artist inspired by another. A song, a romance, and a new classic movie born right before your eyes.