RACIST FEARMONGERING. Trump’s scam: “Republicans have done so little and what they have done is so unpopular that their only strategy for the midterms is to make up a racist scam to scare people.”

YES ON 3. Massachusetts trans rights law in danger of being repealed: ‘Question 3 asks voters if they want to keep the law that forbids discrimination based on gender identity in places of public accommodation — any place open to the general public, such as hotels, stores, restaurants, theaters, sports facilities, and hospitals. A “no” vote on Question 3 would repeal the law, which was signed in July 2016 by the commonwealth’s Republican governor. The measure is the first statewide referendum to put the question of protections for transgender people in voters’ hands.’

DOLLY. Julianne Hough will play Jolene in the new Netflix series based on Dolly Parton’s songs.

CROSS COBURN. Catfishing and conspiracy in Groves, Texas: “A young city councilman’s Grindr photos were leaked, and he now faces a recall election. Was there a conspiracy to oust him, and did it come from inside City Hall?” We covered this story earlier this year.

RACHEL MADDOW. On the midterms: “If you are sensing a little tension, a little drama, a little frisson of excitement about the election — as we’re just about five days out from the election … that is not just you projecting from your own internal levels of anxiety and stress. What you are sensing is a true thing that is measurable in the world, never more so than it is measurable tonight.”

JAMAL KHASHOGGI. Saudis dissolved his body in acid: “The reason they dismembered Khashoggi’s body was to dissolve his remains more easily,” Yamal Aktay said in an interview with Hurriyet Daily newspaper. “Now we see that they did not only dismember his body but also vaporized it.”

SHE SAID HE SAID. Sean Hayes pays a visit to Ellen.

PRIVACY. Private messages from 81,000 hacked Facebook accounts for sale: “The perpetrators told the BBC Russian Service that they had details from a total of 120 million accounts, which they were attempting to sell, although there are reasons to be sceptical about that figure. Facebook said its security had not been compromised. And the data had probably been obtained through malicious browser extensions.” 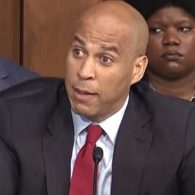 NEW JERSEY. Cory Booker can now legally run for Senate and President at the same time. ‘Gov. Phil Murphy on Thursday signed a bill — unofficially dubbed “Cory’s Law” — that would clarify that a U.S. senator or member of the U.S. House from New Jersey can appear on the primary and general election ballots for those offices as well as for the presidency.’

KNEE TAKER OF THE DAY. This unidentified 49ers cheerleader.

OUMUAMUA. Was it sent by aliens on a reconnaissance mission? ‘The authors believe it would be highly unlikely for a random piece of space debris from an alien society to simply find its way into our solar system by chance unless the galaxy were completely littered with this junk. It’s not impossible, but they argue that previous calculations they’ve conducted suggest it’s more likely that, if ‘Oumuamua came from an alien civilization, it was sent on purpose.’

OUT OF CONTROL FERRY OF THE DAY. This one in the port of Barcelona.

NEW TUNE OF THE DAY. Mariah Carey “A No No”.

COVER OF THE DAY. Katy Perry “Waving Through a Window”.