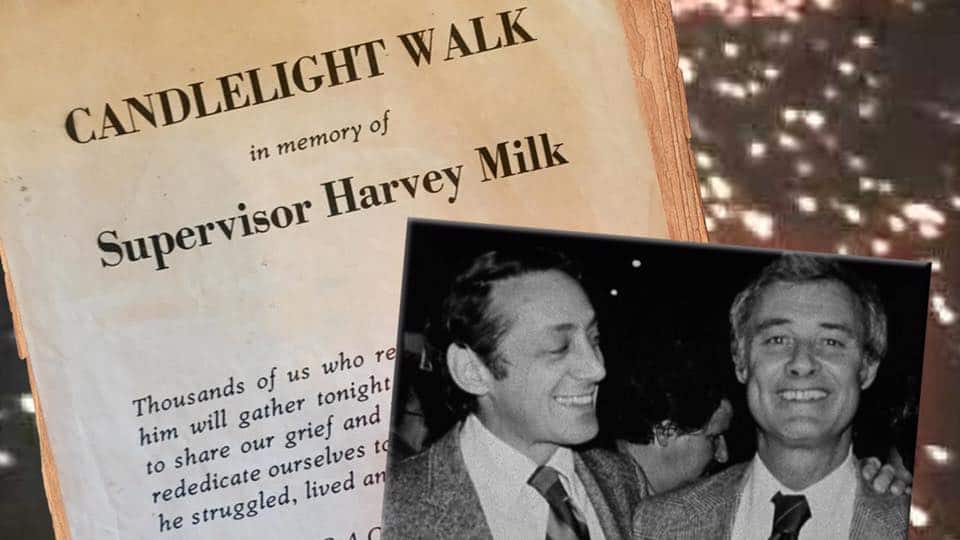 Gay rights icon Harvey Milk and Mayor George Moscone will be remembered on November 27 at 7 pm with a candlelight walk from the plaza named for Milk to City Hall, where they were assassinated by SF Supervisor Dan White 40 years ago.

The walk, which will echo the spontaneous march that took place shortly after the murders, is being organized by the Harvey Milk LBTQ Democratic Club, which writes: “In November of 1978, bookending the Thanksgiving holiday, the city of San Francisco and, it might be said, the world was changed forever. The double horror of the tragedy at Jonestown, followed by the slaying of Harvey Milk and George Moscone was a crushing trauma to the heart and soul of San Francisco, and yet in that darkness we rose together in candlelight not only to remember those we had lost but to strengthen and galvanize ourselves to give them voice to continue their fight and and vision for the future….In honour of that same eloquent response, the Harvey Milk LGBTQ Democratic Club invites all to join us in quiet reflection from those who knew these great advocates of social justice at Harvey Milk Plaza. Following this, we will walk in candlelight to the steps of City Hall where current community leadership will echo their vision, just as those who were there did that warm November night in 1978.”

Said Sally Miller Gearhart of the march in 1978: “It was one of the most eloquent expressions of a community’s response to violence that I’ve ever seen, and I think that we as lesbians and gay men, and all the straight people who were marching with us that night – and there were thousands – I think we said it. I think we sent a message to the nation that night about what our immediate response was – not violence, but a certain respect for Harvey and a deep… a deep… regret and feeling of tragedy about it, because Moscone had been our friend as well.”