HAIL MARY. Rachel Maddow on Trump’s appointment of Matthew Whitaker as acting attorney general: “His one, big, desperate, probably-won’t-work effort to try to fix all of his problems all at once by trying to fix law enforcement so it starts to help him out instead of continuing to threaten both him and senior members of his administration.” 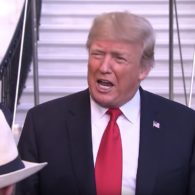 MUST-READ. Trump’s five days of fury: ‘Trump was told that morning by Deputy White House Chief of Staff Zachary D. Fuentes that the Secret Service had concerns about flying Marine One through the rain and fog from Paris to the cemetery 50 miles away, and that a motorcade could be lengthy and snarl traffic in the area, according to one senior White House official. Trump chose not to make the trip, and Kelly, a retired Marine Corps general, and Marine Gen. Joseph F. Dunford Jr., chairman of the Joint Chiefs of Staff, attended in his stead. But Trump quickly grew infuriated by a torrent of tweets and media coverage suggesting that the president was afraid of the rain and did not respect veterans.’

GEORGE CONWAY. Kellyanne Conway’s husband forms attorney group to speak out against Trump: “We believe in the rule of law, the power of truth, the independence of the criminal justice system, the imperative of individual rights and the necessity of civil discourse,” the group, Check and Balances, said in a mission statement. “We believe these principles apply regardless of the party or persons in power.”

UNFAIR ELECTION. Hillary Clinton on Stacey Abrams: “If she had a fair election, she already would have won.” 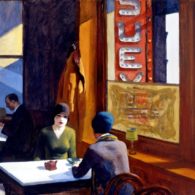 ART. Edward Hopper’s “Chop Suey” sells for record $92 million: ‘The jewel-toned painting, in which Hopper’s bride is shown wearing a green V-neck sweater and a brown hat while sitting in a sunlit Chinese restaurant, was estimated to sell for between $70 million and $100 million. The work was being sold from the estate of luxury-travel executive Barney Ebsworth, who died in April.

PARADISE. Man saves mule from backyard pool: ‘As Hill and a friend walked up to the home, they noticed a mule pacing back and forth. They went over to the animal to see if it was OK and make sure it hadn’t been burned when they saw another mule lying in the pool in the backyard. The mule, who was trapped in the pool cover, looked as if she had given up and “had the look of defeat in her eyes,” Hill said.’

BIRTHDAY SURPRISE OF THE DAY. Jimmy Kimmel gets surprised by Aunt Chippy and her Chippendales.