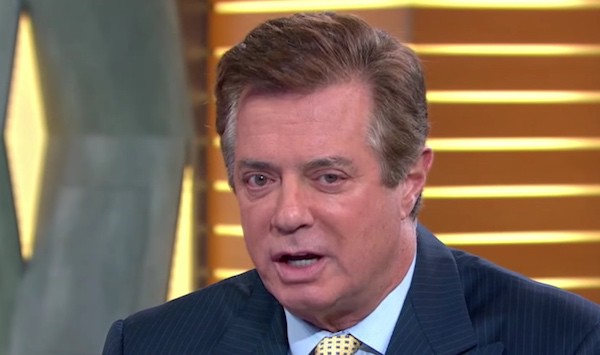 Donald Trump told The New York Post in an interview that a pardon for embattled former campaign manager Paul Manafort is not off the table.

Trump also ripped the Mueller probe: “If you told the truth, you go to jail…You know this flipping stuff is terrible. You flip and you lie and you get — the prosecutors will tell you 99 percent of the time they can get people to flip. It’s rare that they can’t…But I had three people: Manafort, Corsi — I don’t know Corsi, but he refuses to say what they demanded. Manafort, Corsi and Roger Stone.”

Added Trump: “And I’m telling you, this is McCarthyism. We are in the McCarthy era. This is no better than McCarthy. And that was a bad situation for the country. But this is where we are. And it’s a terrible thing.”

Writes Brent Budowsky at The Hill: ‘If Trump does pardon Manafort, there is a high probability that these matters are ultimately litigated before and decided by the United States Supreme Court. If Trump does pardon Manafort, the public firestorm of anger and outrage would be so extreme that impeachment consideration would probably be initiated even by a Republican House, and certainly by a Democratic House in January. The smart move for Senate Republicans would be for them to immediately provide protections for Mueller against a Saturday Night Massacre and to publicly and privately warn Trump to not pardon Manafort or move against Mueller.  However, Senate Majority Leader Mitch McConnell (R-Ky.) appears to be making the same mistake after the midterm elections that House Republican leaders made before the midterms.’

Trump ramped up his attacks on Mueller on Thursday morning, tweeting: “Did you ever see an investigation more in search of a crime? At the same time Mueller and the Angry Democrats aren’t even looking at the atrocious, and perhaps subversive, crimes that were committed by Crooked Hillary Clinton and the Democrats. A total disgrace!…When will this illegal Joseph McCarthy style Witch Hunt, one that has shattered so many innocent lives, ever end-or will it just go on forever? After wasting more than $40,000,000 (is that possible?), it has proven only one thing-there was NO Collusion with Russia. So Ridiculous!”