HOUSTON. LGBTQ activist Ray Hill dies of heart disease at 78: ‘Houston’s fiercest champion of LGBTQ rights expired peacefully in hospice care at Omega House, enveloped in the love of friends and admirers. With his transition, the 78-year-old takes with him an enormous personality, groundbreaking life, unique brand of courage, and rare sense of humor.

NEEDED CHEETOS. That time a bear walked into a police station…on two legs.

JEROME CORSI. Roger Stone associated says he’ll reject plea deal in Mueller probe. “They can put me in prison the rest of my life. I am not going to sign a lie.”

On Fox & Friends, Border Patrol Foundation president defends pepper spraying latinx migrants because “it’s natural. You could actually put it on your nachos and eat it.” pic.twitter.com/QLdQXqqNno

THE NEXT REMAKE. Four Weddings and a Funeral? 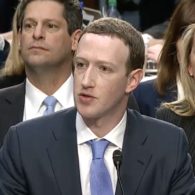 FACEBOOK. UK seizes documents: ‘Parliament has used its legal powers to seize internal Facebook documents in an extraordinary attempt to hold the US social media giant to account after chief executive Mark Zuckerberg repeatedly refused to answer MPs’ questions. The cache of documents is alleged to contain significant revelations about Facebook decisions on data and privacy controls that led to the Cambridge Analytica scandal. It is claimed they include confidential emails between senior executives, and correspondence with Zuckerberg.’

HAYLEY KIYOKO. Being part of the LGBTQ community is very empowering: “It makes me emotional… We all go through tough times accepting ourselves and to be able to know so many people accept me for who I am – I just feel like we all want that validation and to be able to love yourself. You’re wanting people to approve so then you can feel free to be who you are. My fans are able to give me that, and I try to give them that energy straight back to them – give them that space to love themselves, and to feel open and free.”

As many as 145 pilot whales die after becoming stranded on a remote beach on New Zealand's Stewart Island.

The country's Department of Conservation said it responds to an average 85 marine mammal strandings per year. https://t.co/pNjQaSilCD pic.twitter.com/pvZDxw8VUs

NEW TUNES OF THE DAY. Perfume Genius (aka Mike Hadreas) “Alan” and “Not For Me” benefiting Immigration Equality: “Immigration Equality is doing important work providing free legal services for LGBTQ and HIVpositive individuals that are seeking asylum in the US. It’s a hugely important cause to me, especially now,” says Hadreas. “Like many generations before us, we still have many challenges facing us here in America, but also around the world. In over 80 countries, being LGBTQ is still criminalised. It is vital that we as a nation and as a global community continue to fiercely support those that keep us moving forward. Everyone deserves a chance to be safe and free – it is a human right.”

Previous Post: « Shawn Mendes Feels Like He Needs to Prove He’s Not Gay
Next Post: Transgender Woman Who Died in ICE Custody Was Beaten Before She Died »