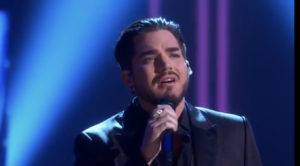 Adam Lambert wowed Cher and the crowd with his cover of “Believe” at the 2018 Kennedy Center Honors which aired on CBS last night.

The Kennedy Center held its 41st annual national celebration of the arts on December 2 and Lambert’s performance was among the highlights.

“The world looks to America for its creative instincts and artistic courage,” said Kennedy Center President Deborah F. Rutter. “This year’s slate of Honorees represents the pinnacle of our nation’s originality and the rich mosaic of diverse perspectives and art forms that has come to define who we are as a people.”

I am speechless @adamlambert just #devastated me with his #tribute to @cher singing ‘Do you believe in life after love’ truly #amazing. Jb @ Palm Springs, California https://t.co/IQlMM9OiK4