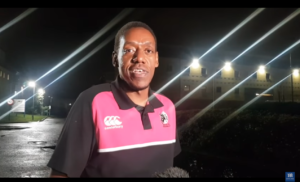 A gay rugby player in the UK who was ordered to pay hundreds of pounds in council tax (a property tax) while fighting deportation to Kenya, has had his bill paid by two strangers reports the BBC.

Kenneth Macharia, who is gay, was born in Kenya where homosexuality is illegal. He moved to the UK on a student visa in 2009. He was granted two extensions, once as  as a student and then as a highly skilled migrant (in mechanical engineering). The 28-year-old applied for asylum in 2016, but KRTV reported that his application was rejected in November.

Macharia asked for his application for asylum to be judged a second time, but then a new hurdle emerged. Macharia had been paying the council tax for his studio flat in Glastonbury, Somerset until he was not allowed to work while challenging to repeal his deportation notice.

To help pay the tax while he’s jobless, Macharia looked into a council-tax discount. The Mendip district council offers aid of up to 80 percent off for people of a working age.  In a letter sent to Macharia, Mendip District Council said it had decided he was not entitled to support because he “did not have the right to remain in the country.”

Macharia was in a panic and facing eviction and deportation when two anonymous donors came forward to his tax bill. “I didn’t expect it but two people have come forward to pay it,” he said.

“They contacted the team chairman and they’ve paid until June next year,” he said. “The support gives me hope.”

A council spokeswoman told The Guardian: “While we cannot comment on individual cases, we can confirm that where a person is currently seeking asylum, they do not meet the criteria for council tax support.”

His friend Murray Jones in a public appeal to the public in The Guardian explained that Macharia came here legally and has made his home here.

“If he is not granted asylum his life will be in danger.” Jones said.

According to a 2007 Pew Global Attitudes Project, 96 percent of Kenyan residents believe that homosexuality is a way of life that society should not accept, the fifth-highest rate of non-acceptance in the 45 countries surveyed.

A grateful Macharia talks to reporters below about how the highly publicized nature of his case would bring him more harm as the Kenyan government may seek to make an example of him.

He could spend up to 14 years in prison.