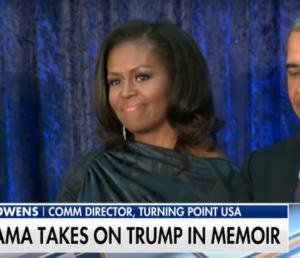 Former first lady Michelle Obama has been named America’s most admired woman of 2018, according to a Gallup poll.

It’s the first time in 17 years, a woman other than Hillary Clinton has been named by Americans as the woman they admire most. Obama who finished second to Clinton three times in past polls won by a significant margin this year with 15 percent of those polled picking her. Oprah Winfrey was second with five percent, and Clinton and Melania Trump tied at four percent.

Gallup attributes the switch at the top of the women’s list to the fact that Clinton “more fully retreated to private life after a long career as first lady, U.S. senator, secretary of state and two-time presidential candidate.”

Michelle Obama is currently touring the U.S. to promote her best-selling autobiography, Becoming, putting her back in the spotlight.

One the many appearances that have endeared Ms. Obama was an appearance on Ellen (DeGeneres is also in the top ten) last month where Obama recounted a funny anecdote. Obama described the night that the White House lit up in rainbow colors shortly after the Supreme Court’s ruling on marriage equality. The former First Lady and Malia Obama snuck out of the White house so they could celebrate with the people outside.

Turns out there was more to her story about getting out of the White House than what she had so eloquently written in the book, and she hilariously recounted how she tried to wrangle Barack to come outside as well, and the Secret Service’s pursuit as she and Malia tried to get outside (Watch below).