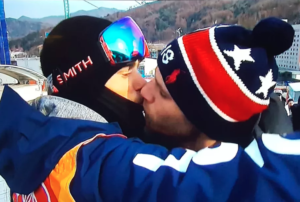 Olympic freestyle skier Gus Kenworthy’s televised kiss with his boyfriend, Matt Wilkas, during the 2018, Games has been named “the gay sports moment of 2018” by Outsports.

“For me, the Kenworthy-Wilkas kiss was the iconic LGBT sports moment of 2018,” Outsports’ Jim Buzinski wrote. “We highlighted our athletes and heroes of the year, all worthy winners. But for a single moment, nothing beat the few-seconds kiss.”

One day, the sight of two men kissing may be commonplace, Buzinski wrote. For now, he noted, “I guarantee that there were young LGBT athletes dealing with their struggles who were given a jolt of hope by seeing something as natural as two men kissing.”

“Our tweet of the moment went viral, with more than 900,000 impressions, showing the power the kiss had,” Buzinski concludes.

A first — NBC just showed Gus Kenworthy getting a kiss from his boyfriend Matt Wilkas on live TV at the @Olympics. https://t.co/WlAgM5edYb pic.twitter.com/5M3hP3kYCk