#TBT: Remember when Kenny got a cute boyfriend on The Real O’Neals and did a Sia mashup of Oh Holy Night?

IT’S RAINING PLAYS. With numerous shows closing due to lackluster ticket sales actor Michael Urie asks if we aren’t eating our own in How Many Gay Plays Can Broadway Sustain?

JUST SAY NO!  Super Cutie Timothée Chalamet says the message of Beautiful Boy is to say no to drugs.

THIS MOVIE COST HOW MUCH?! Check out the amazing promo pictures for this community theater production of Aladdin–Oh wait...

MUST SEE! The Many Hats of Ralph Arnold: Art, Identity & Politics showcases the Black, gay artist’s 1970s photocollages, which commented upon mass media portrayals of sexuality and race.

GET SMART A new app called HIVSmart! lets people test themselves for HIV, connects them to care quickly, and could be adapted for many at-risk populations, according to a new study.

WHO’S #1? Who will be crowned the RuPaul’s Drag Race All-Stars 4 winner?

NEXT! Lin-Manuel Miranda talks about his future. 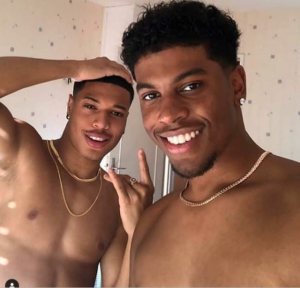 Previous Post: « Zach Stafford Will Be The First Black Editor-in-Chief Of ‘The Advocate’: BREAKING
Next Post: ‘Chill’ Is Unapologetically Black and Gay »