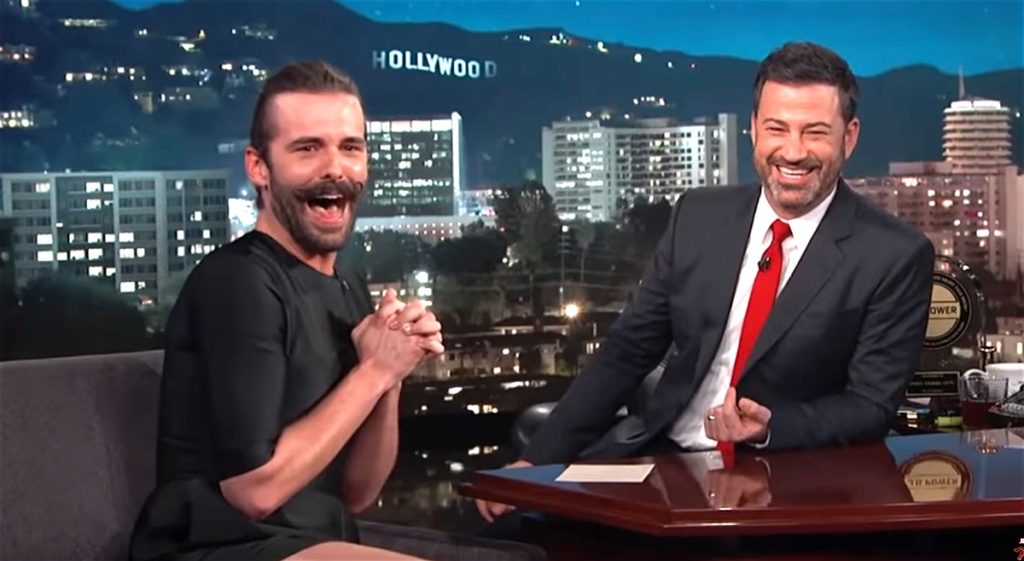 Queer Eye grooming guru Jonathan Van Ness sat down with Jimmy Kimmel (in a romper) and got a big surprise blast from his past.

Van Ness flirted with Kimmel and praised him for exercising his First Amendment rights before the conversation moved on to Queer Eye and how Van Ness wound up on the show.

Said Van Ness: “[When] I grew up, Queer Eye was such an important conversation for me with my family. It was one of the first places where I could really speak to my grandparents and have a conversation topic that was amazing gay men living their truths and having it not be like this [whispers]. It was like this proud amazing moment. So to be a part of it now was really important.”

Van Ness added that when he read that they were rebooting the show online and they said “we’re turning red states pink one makeover at a time” he said [slaps knees and makes face]….”I’m from rural Mississippi I wanted to be a part of this pink makeover!”

Van Ness described the audition process where 50 gay men descended upon a ballroom in Glendale, California.

“We mingled each other to death, kind of, but in a really loving way.”

After the audition, Van Ness said he had to wait for a while before getting the phone call while doing someone’s hair.

Kimmel also spoke with Van Ness about his upcoming comedy tour, but the highlight of the show was when he revealed a never-before-seen video of Jonathan from his 6th grade talent show doing a floor figure skating routine in an outfit he designed himself.