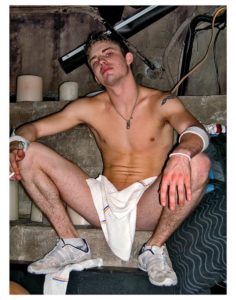 When some artists heard the news that Tumblr was going to begin banning all explicit content on December 17th, many who use the platform began to worry about where they could migrate their content.

Exiled Russian artist Slava Mogutin worried about the impact this ban will have on queer art.

“For me, the personal is political and the political is personal,” Mogutin said in a statement. “At a time when our fundamental constitutional rights are under attack, I believe that queer imagery can serve as the most effective weapon against hypocrisy, bigotry, and censorship. When they censor my work either on social media or in real life, my response is always double up on the queer, double up on the fight and what they don’t want to see. I want to shine light on the darkest corners of human nature and sexuality as a way to understand and peacefully coexist with each other, because being different is a blessing, not a curse.”

Slava Mogutin  was granted political asylum in the U.S. with the support of Amnesty International and PEN American Center in 1995. He and other queer photographers like Ryan McGinley  both defined and documented the brash, sexy, and gritty beauty of  the downtown  East Village scene in New York.

In a 2013 interview, Mogutin told The Advocate he was born Yaroslav Yurievich Mogutin in the industrial city of Kemerovo, Siberia. He was 14 years-old  when left home and moved to Moscow, where he worked as a journalist and editor. Mogutin traded in controversy and defied authority so vehemently that by age 21, he was charged with “open and deliberate contempt for generally accepted moral norms,” “malicious hooliganism with exceptional cynicism and extreme insolence,” “inflaming social, national, and religious division,” and “propaganda of brutal violence, psychic pathology, and sexual perversions.”

You know. A bad boy.

There used to be a platform for Queers artists and a place to make Queer friends. It was a sex-positive space. No more. Remember to logoff #Tumblr today for 24 hours. TWITTER @ TomsFoundation

A post shared by Tom of Finland Foundation (@tomoffinlandfoundation) on Dec 17, 2018 at 4:50pm PST