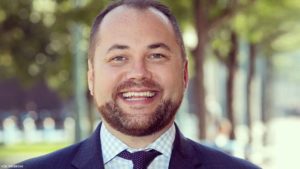 Corey Johnson made history this year and became one of the highest-ranking out, gay, and HIV-positive officials in the country when he was elected speaker of the New York City council (which is second only to NYC’s mayor).

In September in a string of emotional, sincere, and heartfelt tweets,  and the anniversary of learning his HIV diagnoses,  Johnson said overcoming his hard partying benders on cocaine and alcohol, as well as the day he learned he was HIV-positive, contributed to his success today.

The speaker traveling in the bay areas for the holidays tweeted a funny video of him and a friend driving across the Golden Gate Bridge in San Francisco while singing the theme to Full House.

I looked for Uncle Jesse (get it?) but alas. All I found was Kimmy Gilber! pic.twitter.com/Zqhpy51A0C